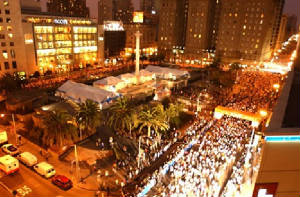 The Starting Line in Union Square!

Yep. I’m officially a marathoner! I completed my first marathon on Sunday in 6 hours and 27 minutes. (with just 3 minutes to beat the cut off! sweet!) Aside from being a little sore, it went really really well. I was impressed by how well I did, all things considering. If you want the whole story, i’m gonna write down all of it! 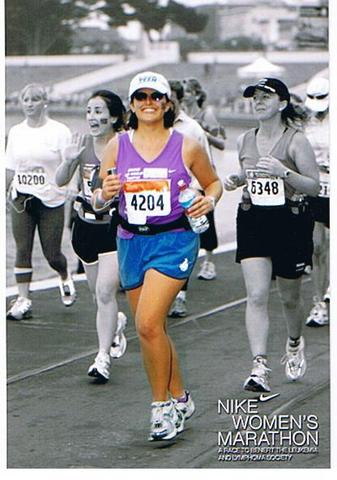 My team left for San Francisco on Friday morning. We all met up at the airport at the crack of dawn. It was so exciting, because it was all so real. We were really going to do this marathon! It was fun seeing everyone and getting all excited about it. When we got on the plane, the stewadess announced that “We have Marathoners on board this morning. They have raised thousands of dollars for the Leukemia and Lymphoma Society”. And everyone clapped. YAY, GO us!!

When we got San Fran, we had a shuttle take us to our hotel. Our team got so lucky because of the 5 Team in Training hotels, ours was defintely the closest to everything. It was right in Union Square, which is where the expo and the Start Line was. Amazing. Our coaches kept telling us that if we ever do a marathon again, we’ll never have it this good! Cool!

We checked into the hotel, and we were only in there for a bout five minutes when we had a knock on our door. It was a hotel guy holding a silver tray with cookies and bottles of water! We were thinking: “wow, team in training rocks!” but then i read the card and realized they were sent by Irving and his family. aweeee…

Right away, we headed to Niketown to pick up our race packets. My number was 4204! We got our shoe chips for timing during the race. We also got our pace bracelets and course maps. Then… we headed to the EXPO!! it wasnt a very big expo, but it was still pretty awesome. I got a foot massage. It was heaven. I also got tons and tons of Ghiradelli Chocolate! mmm… They also had a station where you could make your own posters so people could hold them up and cheer for you. HAHA. so i made one that said: “GO KELLEY!” 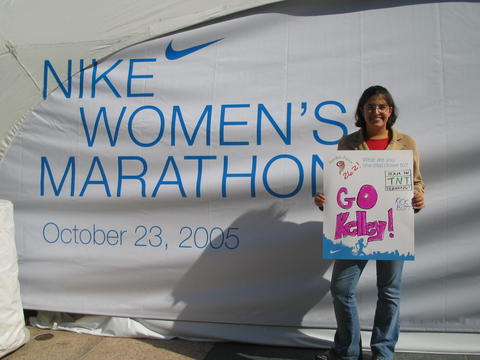 Here are some of my running buddies!

Then, we walked around for a little bit, and rested for the afternoon. For dinner, my Los Angeles team took the New Orleans Team out for dinner. They lost everything, and still came to finish the marathon. So we wanted to honor them. We went to this Chinese restaurant in Chinatown and it was just bad. We each had to pay $31.00 to eat, and it was a 7 course meal and… out of everything, I had some white rice and steamed green beans. Hmm… They had lots of shrimp and fish and stuff, but I dont eat that stuff. Actually, not a lot of people did. We were told not to eat anything you havent tried before, prior to race day. At one point, they brought out fish that still had the heads and tails attached, and then the waiter reached inside and ripped out the bones, right in front of me. EW GROSS! That was just not fun. 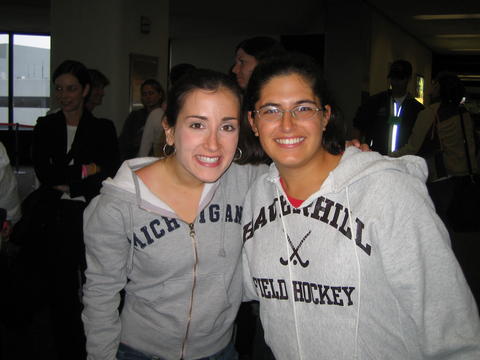 Kelley and Alex… Getting psyched up to run!

On Saturday, we explored the city a little more. I went out for lunch with Irvings Aunt and Uncle (mmm!!) And then we came back and went to our Team in Training Pasta Party. It was pretty good. The pasta was kind of bland, but that’s good because you dont want to eat lots of saucy things before race day either. We listened to some guest speakers, took a team photo, and got excited about the race.

Then we headed to our hotel rooms to prepare for the big event! EJ, Alex and I laid out our clothes for the morning. Tried everything on, and made sure we had everything we could need. Its amazing how much stuff you can fit into a tiny fuel belt. 2 bottles of Gatorade, 2 powerbars, Nutter Butter Cookies, Gummy Bears, Salt packets, body glide, chapstick, sunscreen, camera, cell phone, hat, sunglasses. Yea, I think we had everything we needed. Then we went to bed, but we didnt really sleep well. Here are some tools of the trade:

We had to wake up at 4am to eat because you are supposed to eat 2 hours before the race. So we had bagels and powerbars and a bottle of water for breakfast. Then we got dressed and went downstairs to meet our team. We put Team in Training tattoos on our arms. I took a black sharpie and wrote my name on my arm so when I was running people would see it and yell “GOOO KELLEY!!!” (And, yes, people actually did cheer me on, yay!).

At 6am, my team put trash bags on over our clothes to keep our bodies warm, and we went to wait outside for the start.

We lined up according to our pace group. I started with the 12:00 – 15:00 pace group. After the gun went off, it took me about 15 minutes to actually cross the start line. My mentor, Deborah, told us to walk the first mile or so, to let the crowd pass. 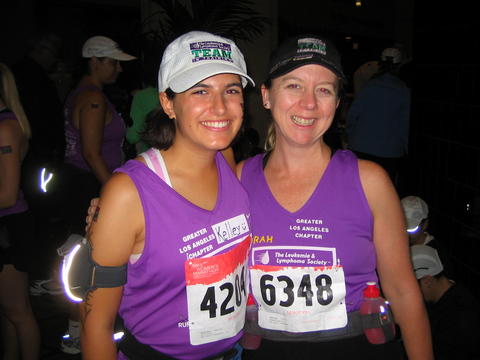 There are people who just get excited and start running right away, and first of all, you have to warm up, and secondly, you waste a lot of energy dodging people. Youre just better off waiting till the crowd disperses. Mile 2 came very quick… and so did mile 3 and 4. Alex and I were having a ball just laughing and looking at the bay. So far so good. Mile 5 seemed a little far away, but mile 6 came quick. I found out after that the sign wasnt in the right place! Hee Hee. Mile 7 was the toughest mile on the course. It was the highest elevation. So we knew we were going to walk that whole mile. My coach was hilarious. He was explaining the hill to us before the race, saying, “As you come around the bay, you’ll see the Golden Gate Bridge on your right. And the big hill will be on the left. And youll be like ‘Cool bridge, big hill, cool bridge, big hill!'” He was right, only it was only 7am, so the bridge was completely covered in Fog, and I never did see the bridge!

The Big hill wasnt that bad, actually, it was really fun, because after the big hill, it was all down hill from there. 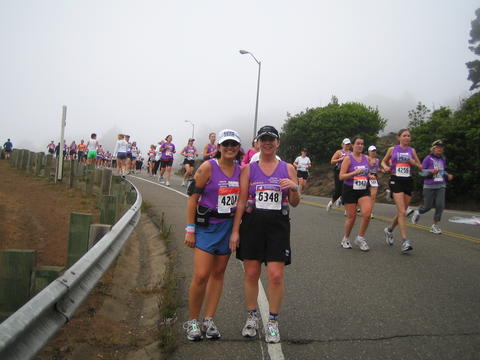 From that point on, everything went smoothly. Alex peed behind a tree, I ate lots of food, and we laughed until mile 11. Irving was waiting at Mile 11 and he took lots of cool pictures for us. What a guy!

From there, we ran about five miles in Golden Gate Park. I was still feeling awesome, lots of energy! The park was really nice and shady and fun. Around mile 14 or so, we got free socks, so I took them and shoved them into my Fuel Belt. (Dont ask me how I had room!) But they were nice Dri-Fit Nike Sock–FREE!! Sweet! We went through a couple of water stops, and kept running till around mile 16 or so. That was a very sad mile because there, you actually pass the finish line. It was a loop, so we still had about 10 miles left to go, but you could hear the crowds. How sad to know that I had 10 miles left, and some people were already finishing! Awe man!!
But I was still feeling good until Mile 18. Thats when I completely lost it. At that point, you had to run around Lake Merced… and you can actually look across the Lake and see where you have to run to, and its so overwhelming. I started to have a panic attack and I was like “OH MY GOSH” I still have 8 miles left!! it just felt so far away, like I was never gonna finish! I called my dad, and I was getting all worked up. I think I was so proud, and so emotional, that I felt like I was gonna cry, and that made it even worse! So I walked about a half a mile, and thanks to alex, I kept running. I got around half way around the lake to mile 20, and I had to walk. My legs just hurt so bad, and I was so tired and sick of running. So I stopped. That was probably the worst thing I could have done because once you stop, its nearly impossible to start up again. So alex went up ahead, and I ate some candy, and walked fast. I met some fun people along the way. But from mile 22- 25, its so lonely, there is no one on the course cheering you on, it just stinks. But finally, I made it to mile 25, and I knew it was so close. A Team in Training coach walked a little with me and he said “See that white tent? Thats the finish line!” I almost died. I could see the end!!! I was so excited and so proud!! But mostly glad it was almost over!! 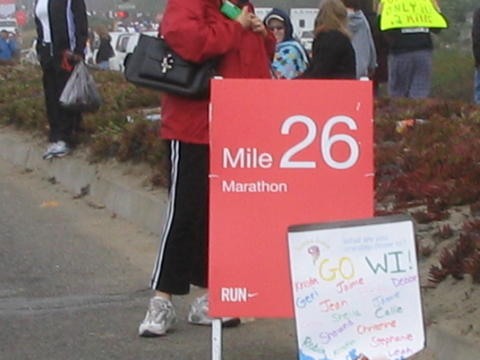 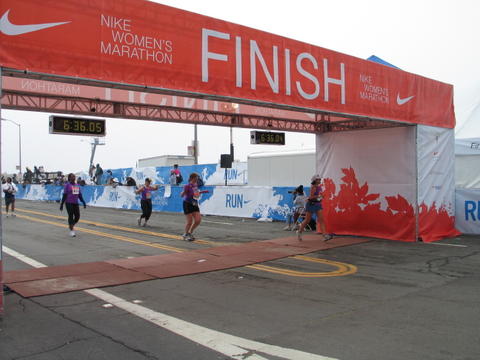 Here I am crying after I finished because I wanted to sit down. HAHAHA What a little brat!

The Day after the marathon, we could barely walk, but we did a little sight seeing and had a nice lunch (full of protein and carbs of course!) Here we are!! We survived! 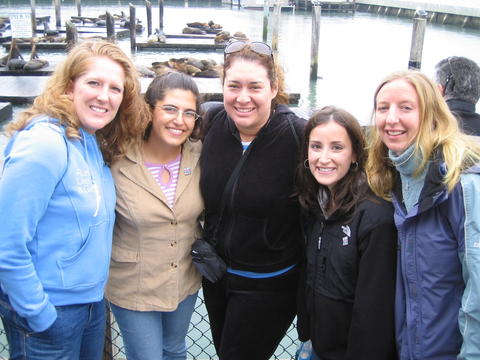 I am now officially a marathoner!!