So I was in Chicago to see my mom and my sisters, but Laurie didn’t know I was coming, so she was completely surprised to see me standing there in her living room at 7:30 in the morning on Saturday. We walked around the city all day, and when we came back to her place, we were exhausted. But then there was a knock on the door and we both thought it was the pizza man who we had ordered from.

Imagine my surprise (and Laurie’s) when my oldest friend, Linsay, walked in! We have been friends for 25 years! She was the first friend I ever had and we are still close today!! She was in town to see a college friend and when she found out I was going to Chi-town, she coordinated with my mom to surprise me! aweeee!!!! Now I’m the one who was surprised! 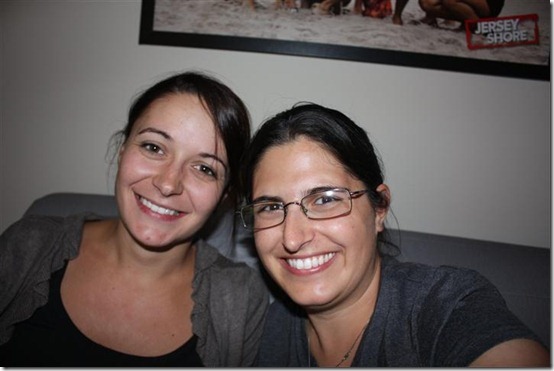 She’s one of those friends that I don’t get to see very often, but when we’re together it’s as if we’d never been separated. We had so much to catch up on since her wedding in February!

Laurie then announced “Is there anyone else I should be expecting this weekend?” hee hee. We took the whole gang to Ed DeBrevic’s for dinner. It’s kind of like Dick’s Last Resort, a restaurant where they make fun of you while you eat and make rude comments. It was very funny. 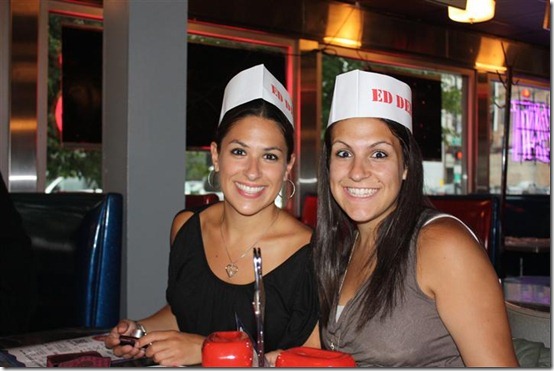 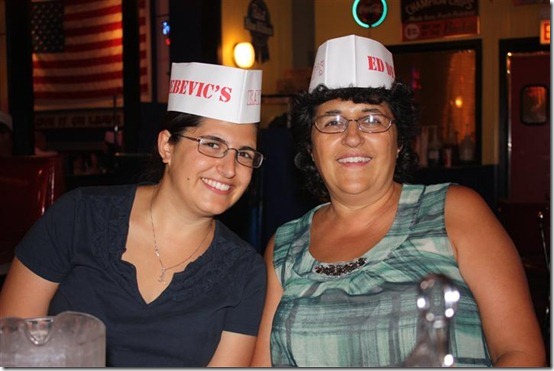 They also did hilarious dances around the restaurant and the staff wears ridiculous outfits.

And somebody told them it was my birthday that weekend and they brought me over their signature “World’s Smallest Sundae” which was just as it seems! One bite of ice cream with whip cream and hot fudge in a tiny shot glass! 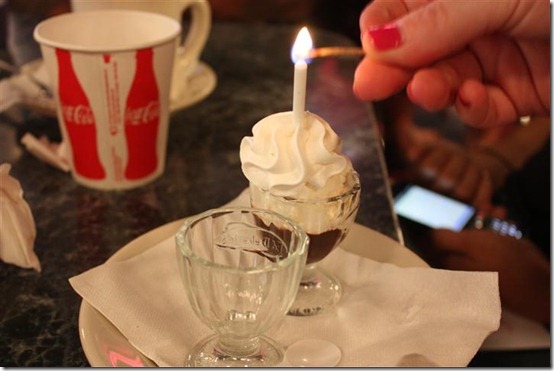 Awe, I can’t imagine a better birthday! So fun! 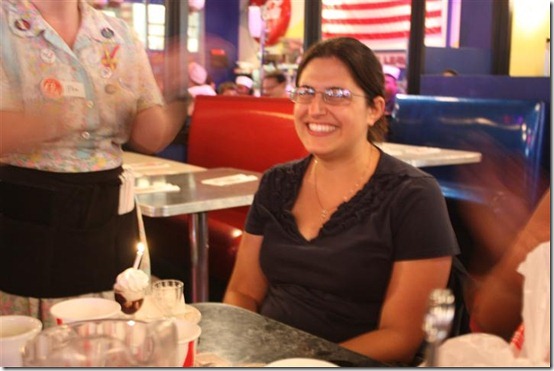 After, we hung out with everyone back at Laurie’s place and my mom surprised me with a homemade cake. (Don’t ask me when she had time to do that!) I was totally surprised and it was SO delicious!

Laurie’s roommate is seriously a saint for letting all of us crash at their place all weekend! Thanks, Girl! 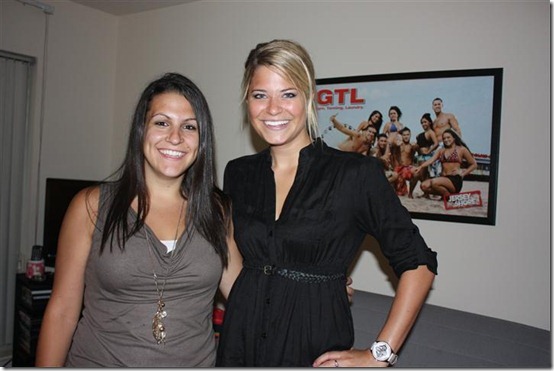 And yes, Laurie totally paid money for that poster behind them. Sometimes, I can’t believe we are related.

More to come from Chicago! Good times ahead!

Early the next morning, we agreed to play doubles tennis with Papa and his friend. I’m really no good at tennis at all, so I was a little scared to play.

But Irving’s pretty good, so what’s the worst that could happen. 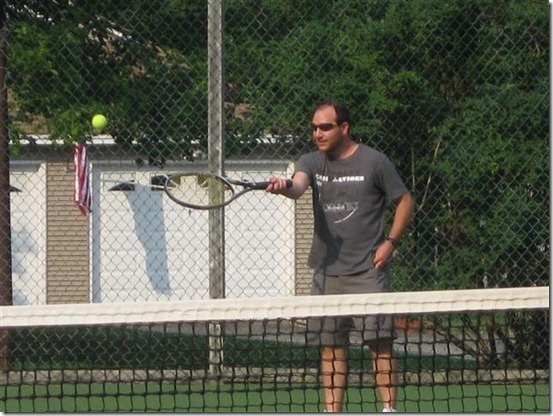 I think I hit 95% of all the balls over the fence. Luckily we had two little kids hanging out with us that would run around and find my lost balls. lol (kidding. kind of).

BAHAHA. This is what I look like when I’m trying to serve. I should go pro.

I think Irving realized right away how bad I am at playing. He was pretty much carrying our team. Well I think he got a little overly competitive and just as I was running to hit the ball, all of a sudden Irving was underneath me skidding on the ground! His arm AND leg were bleeding. Oy vey.

It would have made for a much better story if he’d actually made a point on his attempt, but sadly, that was not the case.

But, the cool part is that Irving’s skin was smeared across the court. See those white marks there? Yep. 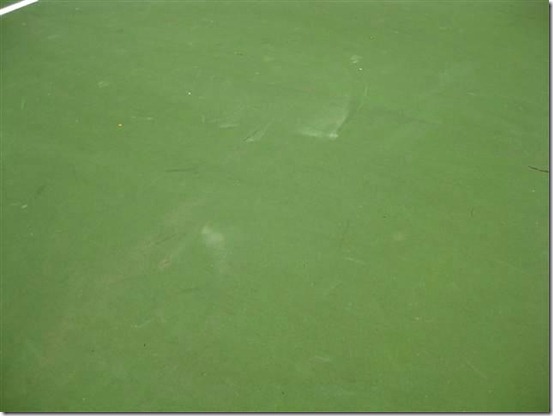 Needless to say, we switched partners after that and I played on Papa’s team. 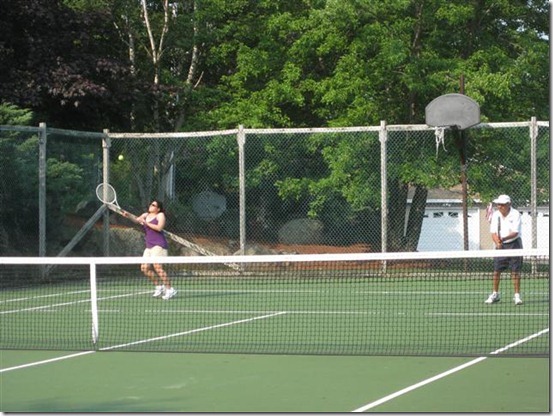 We still lost, but that was entirely my fault, he’s pretty good.

Papa was a Dentist and Grammie was a Nurse, so between the two of them, they got Irving patched up pretty good.

Guess what we did for the rest of the day!

Only this time, we had company! My cousins came to play with us too! 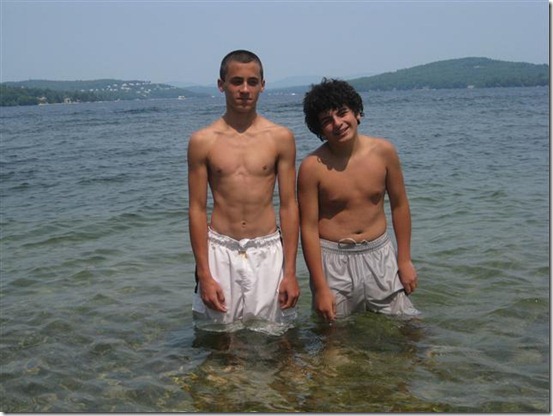 Sisters by the beach! 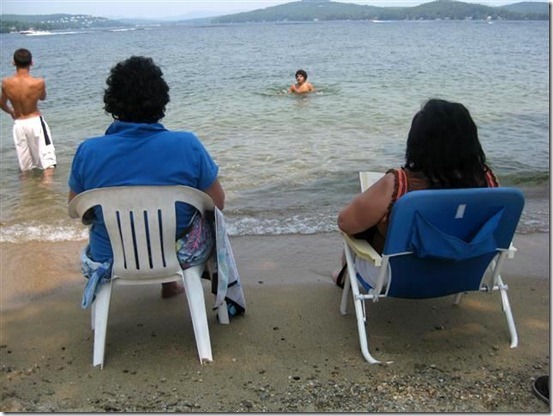 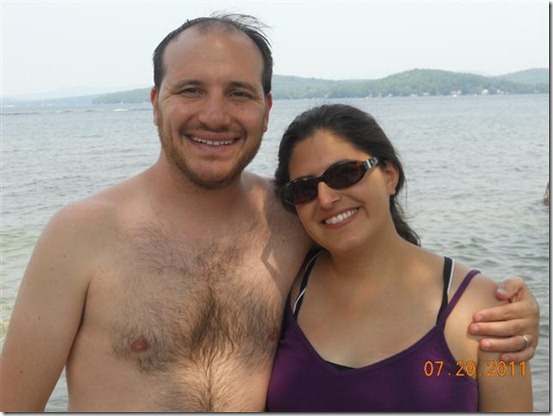 In the afternoon, we decided to take lunch on the road boat. 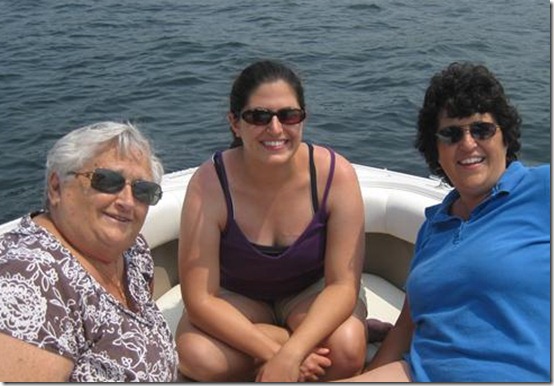 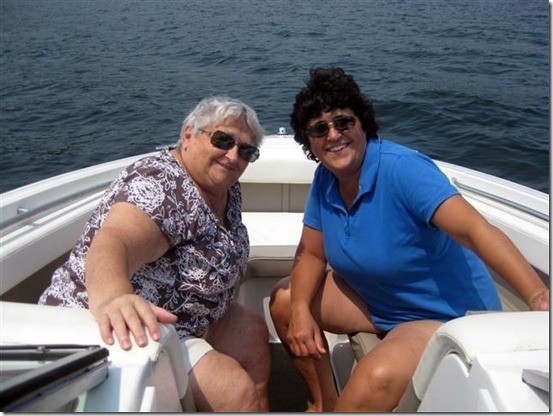 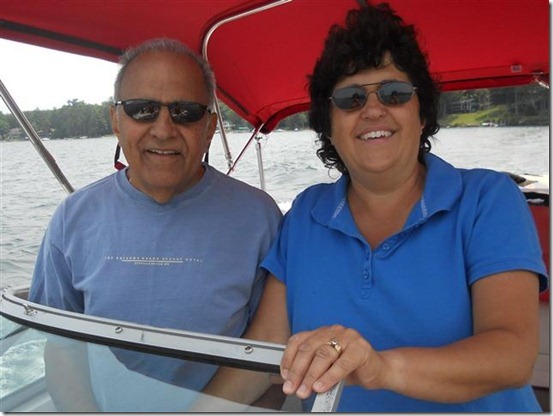 The captain and my aunt!

The boys did a bit of tubing too! It didn’t take long to flip them! 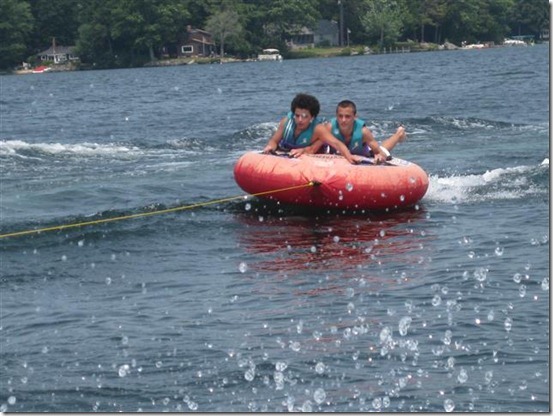 Then Irving went, despite his battle wounds. He had a taped up gauze pad on his arm too! 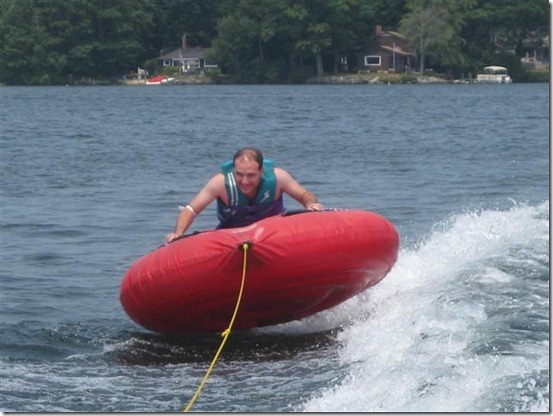 And into the water!

There was scorching heat last week, so the lake breeze and crisp water was welcomed! 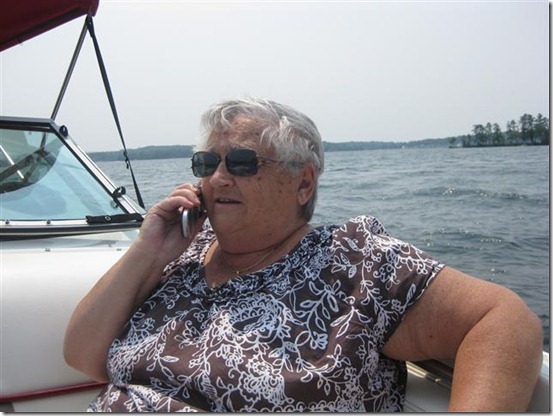 Then we anchored the boat near a trailhead and everyone got off to picnic on land. But Grammie and I decided to stay on the boat and munch on the water. (I ended up skipping the diet coke!)

Everyone else dined in the woods.

And after they were done eating, they found some wild blueberries growing nearby!

They brought us a few handfuls to eat on the boat too!

For the next two hours, the boys played in the water…

My grandparents read and napped on board… 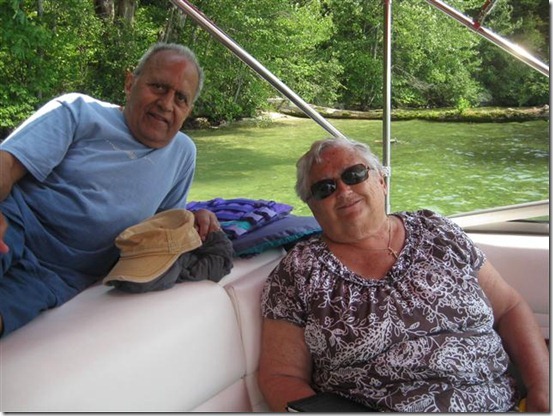 And my mom and I floated on the raft chit-chatting! 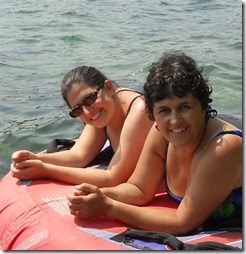 Then the boat ride continued! We passed Bear Island along the way. Check out their little post office! A mail boat delivers the mail daily!

Also on the island is a huge sleepaway camp for kids. My mom went there for many years when she was a kid. And then she went back as a counselor later on. Irving and I decided that whether they like it or not, our kids will be going to the camp. They must grow up knowing this lake. They don’t really have a choice. We’ll fly them there for two weeks every summer.

I sat in the front, closed my eyes, and just felt the breeze on my face, and the sun on my shoulders, and the mist of the waves splashing up as we drove. This image right here is my own personal heaven.

When we were almost back to the dock, our tube blew off the back! We had to circle back around to get it!

I think there was more card games and dominos played in the evening, and then we ventured on foot to get some Ice Cream at the Kellerhaus! Dollar Cone Wednesdays! What, what!?

Don’t worry, we walked a mile there and a mile back… so that makes the calories free, right?

I’d like to say that after this trip I swore off ice cream for a while, but I already broke my streak by getting a Menchie’s yesterday. Someone save me!

Where is your happy place? Did you go to camp as a kid?

Trader Joes recently introduced a new product. It’s a Sugar, Chocolate & Coffee Bean Grinder. I’ll take a gamble on just about anything Trader Joes puts on the shelves, so we decided it was definitely worth a taste.

They say you can put it on anything: cake, coffee, ice cream. **Record Scratch**  ICE CREAM?! Well then I bet it would be GREAT on banana soft serve ice cream!

I whirled up some plain banana soft serve and sprinkled my little heart away.

It added just the right amount of sweetness and flavor. Such a great idea! Such a great idea. I think the grinder only cost $1.99 which is pretty awesome for something so great that will probably last a long time.

I wonder what else I could put this stuff on?

After I was done blogging yesterday, it was time for breakfast!

That’s the beauty of staying in a Bed & Breakfast! It includes breakfast!

Everything was freshly made here and it was delicious! 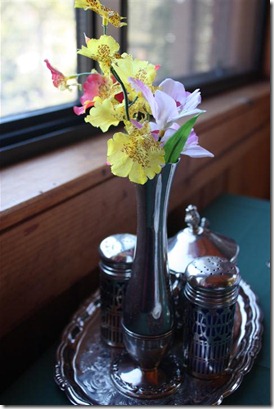 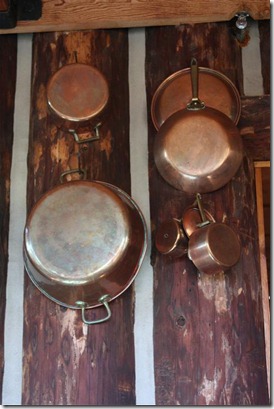 Once we were sufficiently fueled for the day, we headed out on our ziplining excursion!! It was my gift to Irving for Valentine’s Day this year! (Via LivingSocial of course!) We chose Action Zipline, which is right at the base of the ski mountains. They first take you in a large van, and then you switch to army-style off road vehicles. They don’t allow cameras on the tour at all for safety reasons, and I was really bummed I couldn’t get pictures of this part. But we weren’t there for the truck, we were there to ZIPLINE!!!

After a brief safety demonstration, we were already on the platform ready for our first jump! One by one, we zipped across. I had a hard time knowing how to brake, and came slamming into the landing blocks the first few times. But then I got the hang of it.

They were snapping pictures of everyone (but at $5 a pop, we only walked away with two of them). We almost didn’t get any, but these were too good! Plus, a blog needs pictures right? 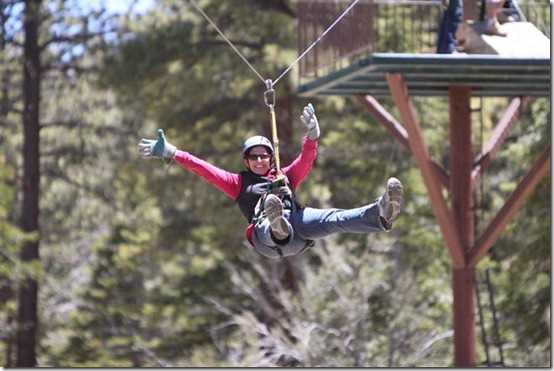 The whole trip took about three hours from start to finish, and it was a blast! It’s an adrenaline rush for sure! We’d do it again in a heartbeat!

After our tour, we grabbed lunch and….dessert! I was dying for some REAL ice cream. I love frozen yogurt, but sometimes, only real ice cream will fit the bill. This was Nestle Tollhouse Cookie Dough! YUM! 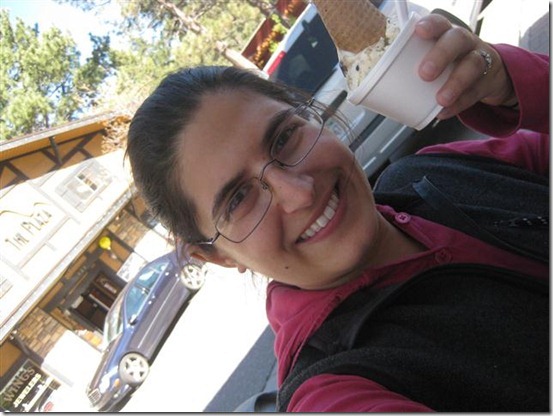 Irving got a frozen chocolate covered twinkie….yea. he did. Oh, and he wanted me to mention that it was also rolled in Oreos too. 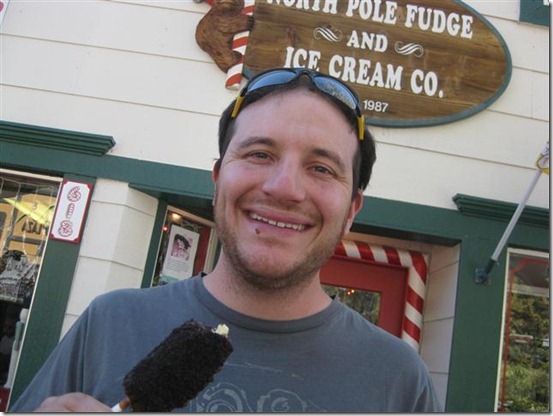 We wanted to get a few more miles in for the day, so we walked to the other side of town to the Bear Mountain Brewery. Irving tried the flight (4oz. each of their signature brews). 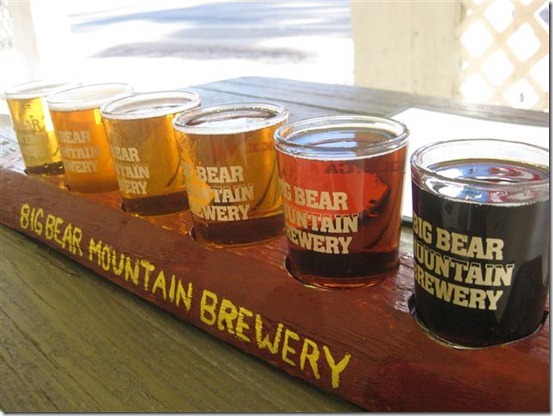 I tried a sip of each, but enjoyed my Arnold Palmer!

We sat for about an hour and chatted and enjoyed the scenery. We were across the street from the Alpine Slides. I’d love to try those one day! 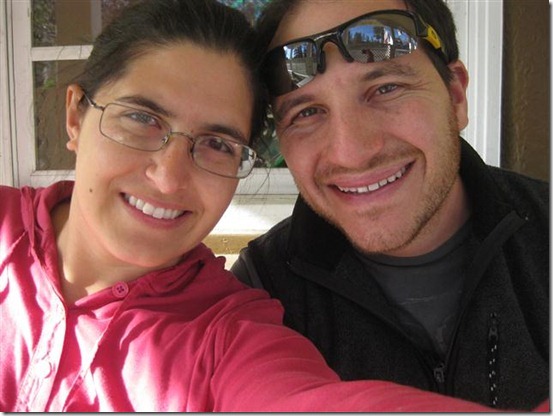 Then Irving declared that the “beers were half way done”. Which meant it was time for nachos.

We split them, but they were mediocre at best. I think we make better nachos at home…

We watched Strictly Ballroom, and were in bed by 8:30. YES!!!! Feels good to get some solid sleep in. There is nothing like waking up at 6:30am refreshed and energized. And I get to sit on the porch again and breath in that fresh mountain air.

Today, we have a 7 mile nature walk planned, and then we’re heading back to LA. See ya later!

I have a sweet tooth. A bad one. Maybe it’s just habitual, but everyday after lunch and after dinner, I’m jonsing for some chocolate. Cookies and anything with frosting will get me everytime. Le sigh.

Tonight, I whipped up another batch of the most delicious banana soft serve. Started it off with 1.5 frozen bananas.

And gave them a twirl in my smaller food processor (which actually works better than the Cuisinart for something like this.

I also added in some chocolate peanut butter to sweeten it up. 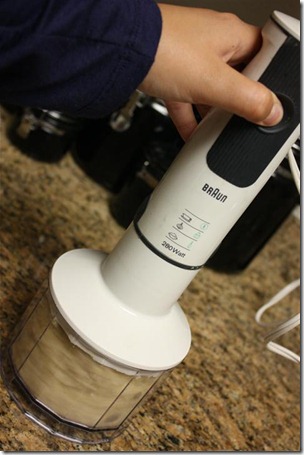 Bada-Bing! Topped off with a few easter/baby shower M&Ms.

Irving had a Trader Joes Ice Cream Sandwich (which are also good, but twice the calories!)
But don’t think for a second that I didn’t have one of these earlier in the week. Summer is here! 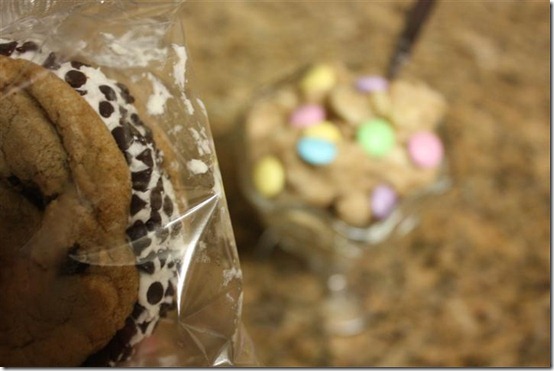 We’re off to watch Weeds! I love that show. It just keeps getting funnier. Kevin Nealon makes the show.