Saturday morning, Adele and I had a date for a ‘Mommy and Me Tea Party’! It was an event that was hosted by Club Momme. Their events have always looked really fun but because they are a bit pricey by playdate standards (this one came to $27.50), I was holding out til the right one popped up. This one sounded fun though, it included tea time with your toddler, a photo session, goodie bag, and use of the indoor playspace at Pamper & Play. I finally convinced myself it was worth it and bought a ticket a week in advance.  I had been looking forward to it all week long. You’ll see below that it didn’t quite live up to my expectations, but we had a good time nonetheless.

It was all the way over the hill, near Beverly Hills (my first clue that maybe this event wasn’t for me). I found street parking and then saw that Adele was fast asleep in her carseat! She hasn’t taken a morning nap in MONTHS! I unbuckled her and she continued to sleep on my shoulder during the two-block walk to the venue. And then slept on me for another half hour or so until I eventually had to wake her up! This was the first time EVER she’s slept on my lap without being in the ergo carrier! Even as an infant, she never did unless she was swaddled. This was a special moment for me! I cherished it with all my heart! I thought to myself the whole day was already worth it just for this! 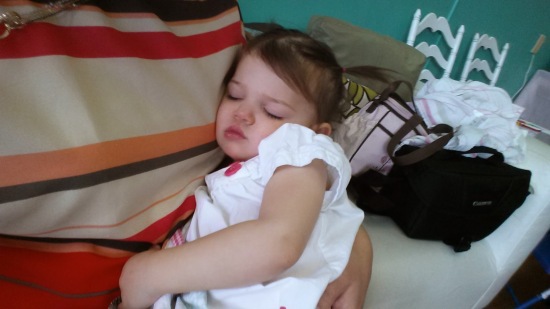 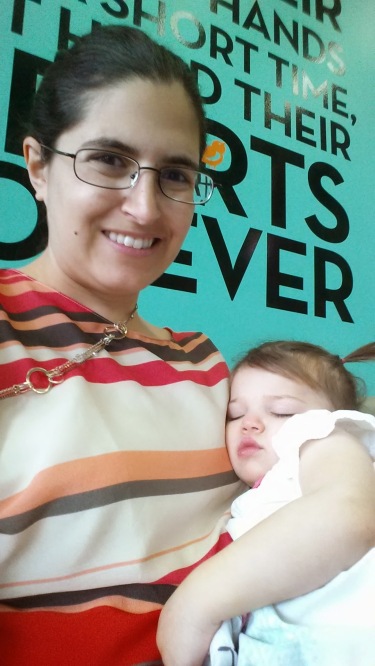 Once Adele was up, it was our turn for the photo session. I think they got some great shots, but then later found out that the session was free… but the actual photos were not. The 4×6 prints START at $115. Um, no.

I was sitting next to a mom who was hastily brushing her daughter’s hair and I overheard her telling her, “You know, you just don’t look pretty enough to take pictures today”. The daughter didn’t seem bothered by it, but it really made me mad. I immediately squeezed Adele a little tighter and whispered into her ear, “You’re the most pretty little girl in the whole world, I love you”. I know there’s all kinds of discussion out there about how instead of telling our girls they are ‘pretty’ or ‘beautiful’, we should use words like ‘brave’, ‘smart’ and ‘strong’. But I would never not tell my girl she is ‘pretty’! Come on, moms! Let’s give these girls the confidence, self-esteem and self-worth they need to be successful in this world!
</end rant>

The ‘Tea Party’ was sort of a joke. They had one kind of hot tea and one kind of iced tea… served in little sample cups (i.e. a few sips and you’re done). They did have some really nice, but fragile tea cups that I would never in a million years trust Adele with. And for sandwiches, they only had two kinds (a turkey/cheese one and a strawberry/peanut butter one). No snacks, no kid options, nothing else! Not even chips or cookies! What kind of tea party is this? But they did have some pouches and snack bars in the goodie bag, so Adele enjoyed that. 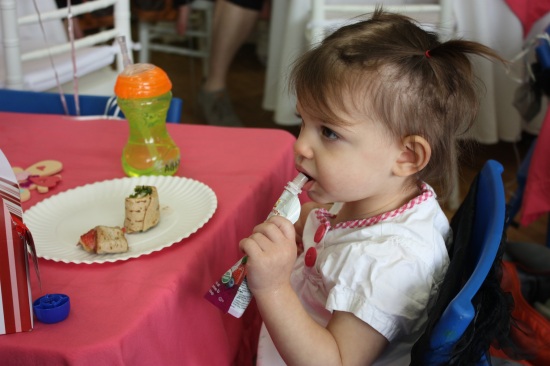 We spent the rest of our time there playing with some blocks and toys. I think she had a good time. And then I won the first raffle prize which redeemed part of the day for me. I was really glad I went though. It was quiet the experience for the people watching alone.

Oh, one more story..right before I left, another mom stopped me to tell me she LOVED Adele’s dress and then asked me who designed it. BAHAHAHA I almost burst out laughing and then I realized she was serious. Turns out it actually was designer… but it was a hand-me-down from a very generous friend (I had no idea!). Guess I shouldn’t have let Adele get strawberries and peanut butter on it from lunch, huh? But she did look really cute (ahem– PRETTY) in it, don’t you think? 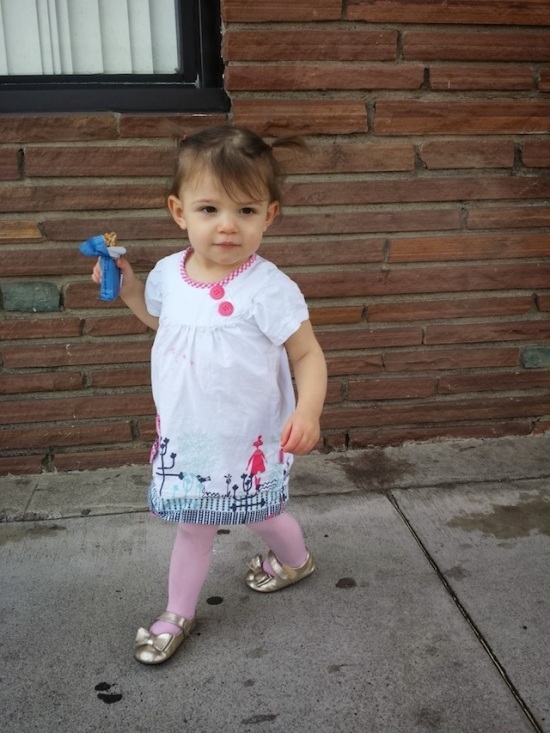 The moms over in that part of LA ain’t got nothing on my Valley Moms though. I’m so thankful for my amazing village of amazing mothers we’ve met over the past two years. Cheers to you, moms. Thank you for raising strong, confident children that I am honored Adele gets to be friends with. You know who you are. xo

We had such a great Valentine’s Weekend! And it was a long weekend too, due to the holiday on Monday! Now that’s love.  Adele had a potluck at her school, so I made mini tea sandwiches (inspired by my Downton Abbey party!). These were berry cream cheese on white bread!

The cream cheese was pink which made a pretty little party sandwich! Not sure if the kids liked them at school, but Adele LOVED them!

She gave her friends little puppy and kitty valentines, along with a bag of teddy grahams. The tags said “BEAR HUGS TO XXXXX, LOVE, ADELE”. I saw it on Pinterest and I was so excited! Adele called them ‘cookie bears’. ha. 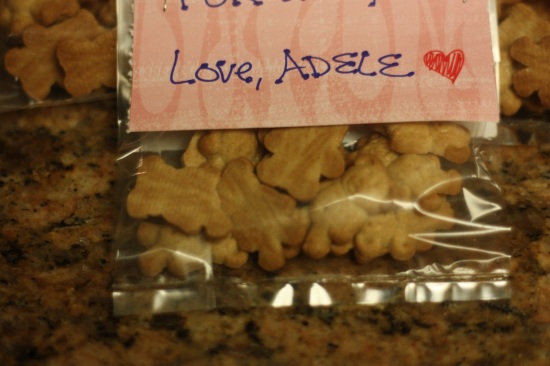 I got out of work early on Friday, which gave us a head start to the weekend of loooooove! We met up with some friends at Pint Size Kids for an afternoon of pretend play! 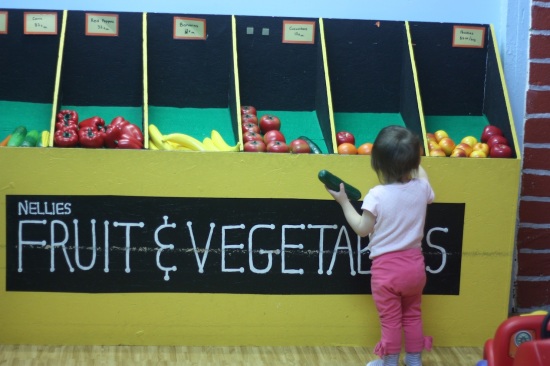 Putting them in her cart… 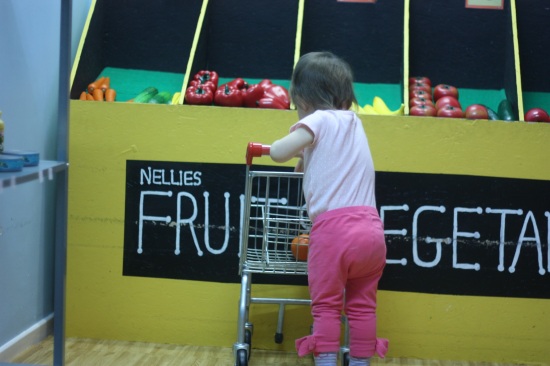 And taking money out of the ATM to pay for it all… My, she’s like a grownup! 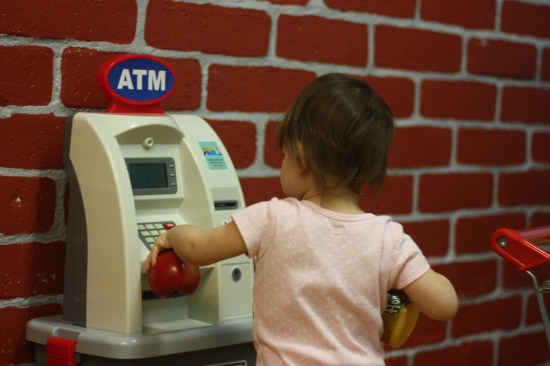 Then she did a load of laundry… 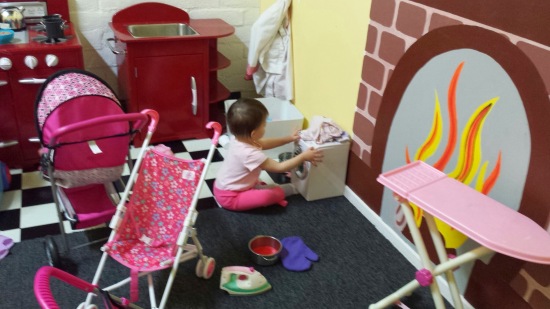 And even ironed it too!

Then she filled up her SUV with gas. 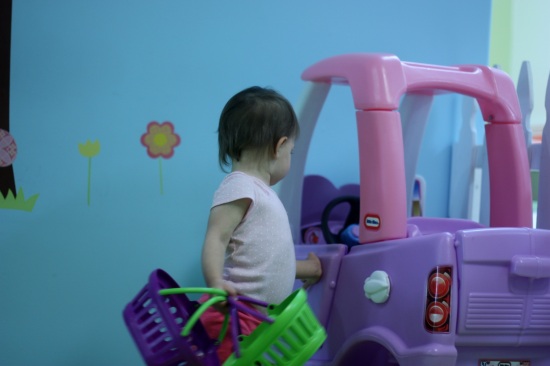 We also practiced pushing our dollies…

And taking excellent care of them.

If you haven’t been to this place yet, you should check it out. It has everything toddlers could imagine. Including books and train sets too! Adele LOVED the choo choos!

And they have GIANT teddy bears. The things toddler dreams are made of. 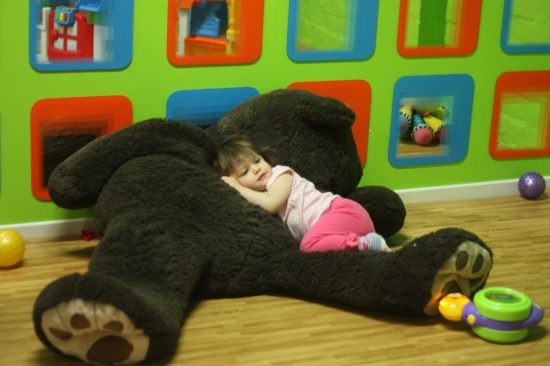 It was so much fun. We’ll be back soon for sure!

Once the three of us got back home, we had a Valentine’s day picnic lunch on the living room floor. Complete with cheese, crackers, olives, salad and raisins! We laughed so hard because it was sort of a disaster. Adele was stepping on everything and making quite the mess. But it was fun and I’m hoping this was a beginning of fun Valentine’s Day tradition! Only next year, I hope there is less sock lint on my plate and smooched crackers on the rug. =)

Our Valentine’s Weekend of Love didn’t end there! Stay tuned for Part 2!

Irving and I had big plans to have dinner at the Olive Garden last night. I loooooooove the Olive Garden and have been begging for months to go there. (Soup, Salad and Breadsticks, whoop!) We tried to make reservations and call ahead, but the only way to get a table is to show up in person…. and when we got there, the wait was 3 HOURS! They even ran out of buzzers and you had to get BACK in line to pick up your buzzer. That’s crazy.

So we jumped back in the car and headed over to another place we’ve been meaning to try: The Federal. It was perfect! Wasn’t too crowded, the food was good and we weren’t rushed at all. 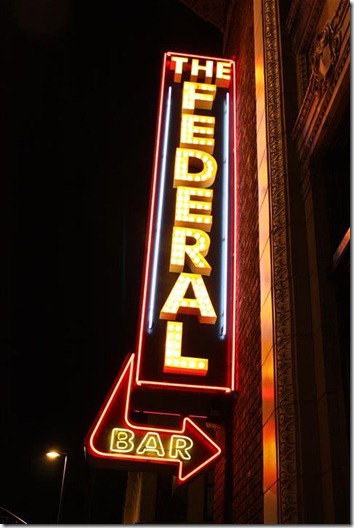 We had a few hours to kill before our movie, so we took our time and enjoyed the conversation. We started off with drinks. Irving had the Sea Dog Blueberry (I stole a small sip and it was amazing!) I had a Seltzer Cranberry, not as good as the beer, but still delicious.

We just chatted for almost two hours about everything and nothing, it was SO NICE! We kept saying how different life will be on Valentine’s Day next year! We’ll have to get a baby sitter to go out like this, just the two of us. But we’re ready for it. We’re looking forward to all the changes life will have in store for us. 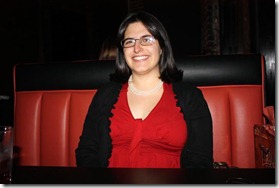 Then we had a photoshoot on the sidewalk, obviously. I wore this dress during my Bacehelorette Party in 2009 and now it’s the perfect maternity dress too. Who knew!

Then it was MOVIE TIME!!!! A theater near the restaurant was showing ‘Romeo & Juliet’ on the big screen!!!!! I practically know that movie by heart (it’s my favorite!!) and I haven’t seen it in theaters since 1997!! Irving had never seen it, so I was SO excited to share it with him. He’s a big John Leguizamo and Baz Luhrnman fan, so I knew he’d like it. Amazingly we made it all the way though without falling asleep. (It started at 10pm!)

It was the perfect Valentine’s Day evening. Love ya, babe!

Happy Valentine’s Day to my amazing husband. Thank you for loving me with a whole heart every day.
You’re going to be an amazing dad soon!  I fall more and more in love with you as time goes on.

And thank you for the GORGEOUS roses you sent to my work yesterday. That was quite the surprise. Thanks for making me feel special. I love you!

We have a fabulous date night planned for this evening. Can’t wait!

We were laughing so hard when we saw this picture last night. We just HAD to buy it. What do you think? Could Irving be the next president?