The older I get, the faster these weeks go. How is it already Thursday? It’s been a pretty good week so far. When I look at my calendar, I think I have something planned almost every day for the next two months. So I should probably enjoy these empty nights while I can.

Last night, we got invited to a screening of The Social Network. I know it’s already out on DVD, I’m really behind on films this year. It was great to see it on the big screen. 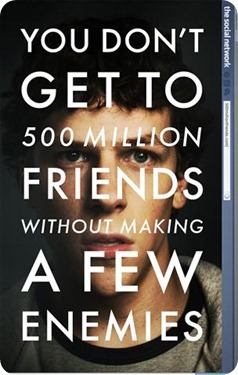 After the movie, the film editors and music guys came to talk about it. The original music was composed by Trent Reznor, of Nine Inch Nails. I always viewed him as a rockstar and partier, but now I realize just how talented and business savvy he is. It was neat to hear his story about making the transition into Hollywood. That music score was GOOD!

In other news, I’m going to a wedding next week and I need to find a dress! I’m hitting up Macy’s and the Mall today. Wish me luck!

Comments Off on How is it already Thursday?