So many cities, where should we go?

This fall, we’re heading back to Europe for a two week trip around Eastern Europe. We couldn’t be more excited. My heart flutters when I think of cobblestone streets, fresh baked croissants, old castles and gelato (Poland has Gelato, right?)

I haven’t been to Poland or Berlin yet (the main reason for this trip), but I’m excited to trek back through Prague, Vienna and Budapest for a second time. I went in 2003 with about $20 in my pocket, so I’m excited to revisit them and explore the sights again with Irving.

He woke me up at 6am yesterday to tell me that the flights have dropped. Still sleepy-eyed, I dragged myself to my computer to scour all the major airline search engines for some deals. We ended up on Delta ($1100 per person — not sure if this is a good deal or not, but it was the cheapest we’ve seen in months).

It made the most sense to go LAX to Berlin roundtrip. But here’s the kicker… the tour ends in Berlin and we don’t fly out for three more days after that. I basically view Europe as my playground, so my mind starts racing…. Three wide open days in Europe! We could go to Amsterdam, Denmark, Munich, Paris, The Alps…!!

Europe really isn’t that big, you can get halfway across it on just about one tank of gas. If we rented a car, we could go ANYWHERE! This is a lot of pressure. 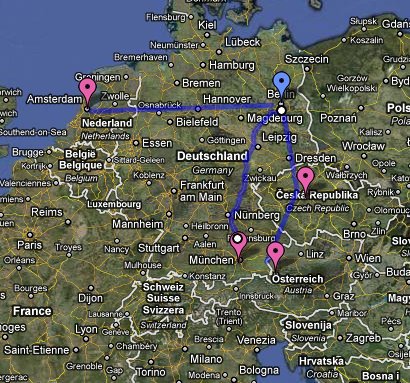 If we did jump in a car and cruise across Germany, there’s only one thing I’m afraid of…

Driving anxiety aside, this is a big decision! We’re definitely leaning towards Salzburg and Munich. I’ve been to both before, but I think Irving would LOVE the Sound of Music tour. Plus driving through the Alps alone in a small european car sounds so romantic.