Here it is. Adele’s big Halloween Costume debut. I had no idea that thinking of a costume for your kid was so much pressure! We went back and forth on a few things and ultimately decided to make her the alien from Toy Story. But then I found this shirt at Target that makes her look like a monster. (Or as my mom pointed out, The Grinch).

Irving told me that Aliens don’t have hair– to which I replied “how do you know?”. So there you have it. Adele is an Alien-Monster for her first Halloween. I’m sure we’ll get lots of “What a cute little boy” comments, but we think she is SO cute in it anyways. She has her whole life to wear Princess dresses. 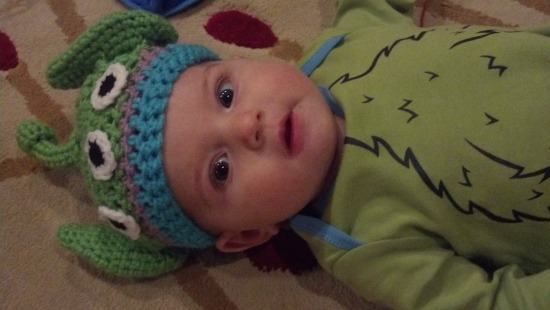 Hat was custom made on Etsy and can be found here!

Adele is taking her role as “Alien-Monster” seriously. As seen in this rare, behind the scenes video.

Comments Off on The Alien-Monster