What can I say? We caught the travel bug….big time. I traveled through Europe for four months in college, but our travel adventures began together in 2008 when we went to Italy. And we were hooked! Last year we jetted off to Russia and the Baltic, it was so exciting to be in places like Moscow, St. Petersburg and Tallin.

Kelley and Irving take on the Middle East! On October 23, we jumped on a 16 hour flight non-stop from Los Angeles to Dubai!!

I have to be honest, 16 hours on a plane sounded like the worst thing in the world, but it really wasn’t that bad. 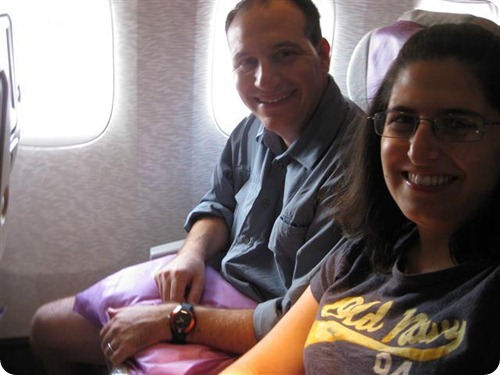 They had a cool feature on the TV screens at each seat where they have two cameras mounted: one in front of the plane and one looking straight down. So as you’re flying, you can see what the Pilot sees! It was very cool.

They have amazing entertainment on board, over 1200 channels of movies, tv and music. It really made the time fly by.

We were skeptical of the food, but it wasn’t that bad.

We had a 3 course dinner, snacks and breakfast. They even served us a slice of pizza in the middle of the night. HAHA just like college.

At one point, we looked out the window and realized we were flying somewhere over Iraq. That was humbling. Dubai is 11 hours ahead of Los Angeles…which means it is literally on the other side of the world.

We have 7 exciting days planned in Duabi and then we fly to Cairo to start a 9 day tour of Egypt with Contiki!

Stay tuned for two weeks worth of pictures and adventures! We are giddy with excitement. And away we go!!

One Response to “And Away we go!”