First, we headed by Metro to the Dubai Marina. This is an up and coming area with lots of construction and high rises. But it was still really pretty.

We met a nice Iranian man who was a contractor on some of the buildings there and he gave us a nice history of the area. We noticed there were very few Americans or Aussies in Dubai, mostly British and Italians. When people found out we were from the States, they asked us a million questions. They were just curious about our life and our culture. That was different from most other places we’ve seen.

Then we took the metro to the Deira area (near the Dubai Creek). We took an Abra (small boat) across the river. It was 1 UAE dollar (which is about 30 cents) to get across.

Once on the other side, we walked to the Al Maktoum House. It was a nice walk along the creek, but it was scorching outside. This was our hottest day yet in Dubai. maybe 90 degrees with high humidity.

The Maktoum family ruled Dubai for many years, and this was one of his estates.

Those sticks at the top were the wind tunnels that allowed the cool breezes to come inside during the summer months.

Then we walked back along the water to a small cruise port for a tour of the creek. 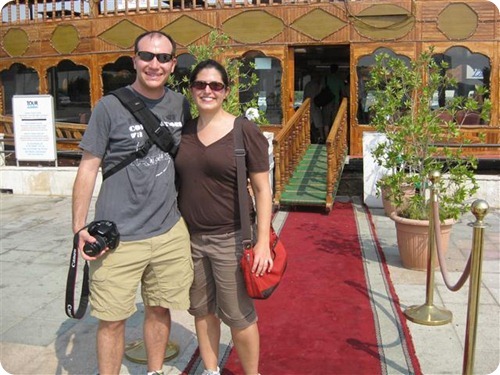 It was stunning to see old Dubai being overshadowed by all the new skyscrapers.

Docked up the creek is the Queen Mary 2 cruiseship. Dubai bought it and is in the process of turning it into a floating hotel. 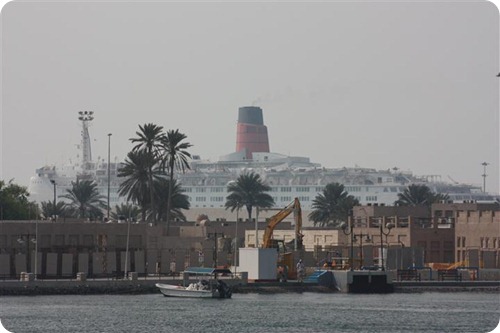 For dinner, we went to the grocery store inside the mall. It was fun to walk around and see what they have and how the locals eat.

Here’s what we got: 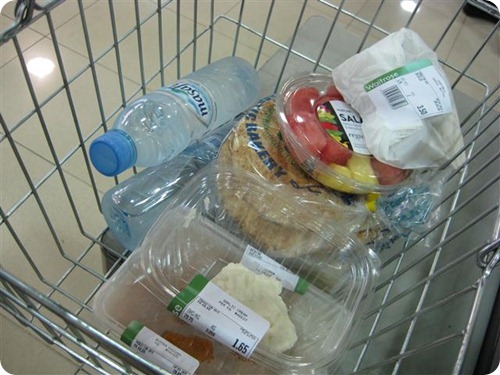 Then we headed back to the Dubai mall (world’s largest).

We were there to see the Burj Khalifa at night.

Our tickets to go to the top weren’t until 9pm, so we stayed down below and watched the water displays while we waited.

The show is similar to the one at the Bellagio in Vegas, only bigger (Dubai wouldn’t have it any other way. lol)

Then we went to the 124th floor again to observe the city from the sky. 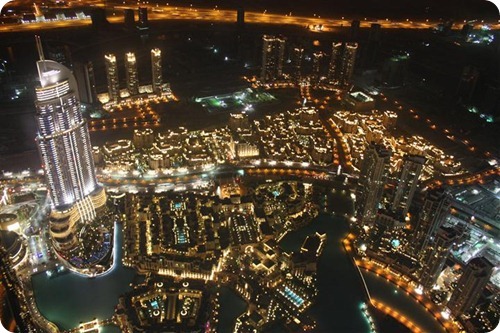 We weren’t sure if it would be a waste to go up the tower twice, but the views were just stunning. It’s a very photogenic city.

And bonus: We got to watch the water show again from the top!

It  didn’t feel like we did too much today, but we were just exhausted when we got back to the hotel. The heat coupled with all of our walking definitely wore us out.

One Response to “The Marina to the Creek”