Embarking on an Egyptian Adventure! November 11, 2010

Early Saturday morning, we took the metro to the airport in Dubai and headed to Cairo. We had a fabulous time in Dubai, but a new adventure was awaiting us! 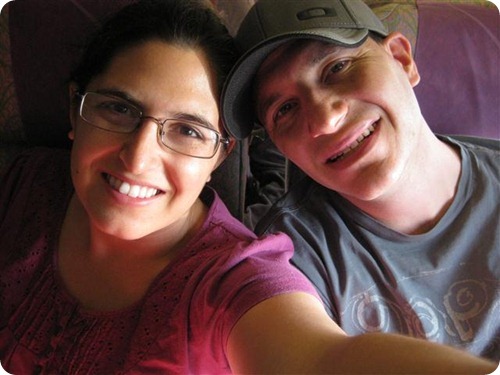 When we took off, we could see “The World” from the air. Those are the man-made islands that they are creating to look like different countries.

We also had some great views of the ‘palm islands’. It is amazing how they built those.

Emirates Airlines once again impressed us. Dubai to Cairo is less than four hours. Our flight path went directly through Saudi Arabia, just south of Iraq.

Nervous? Nah…I napped the whole way. (Which of course means obligatory photos of me sleeping. haha) 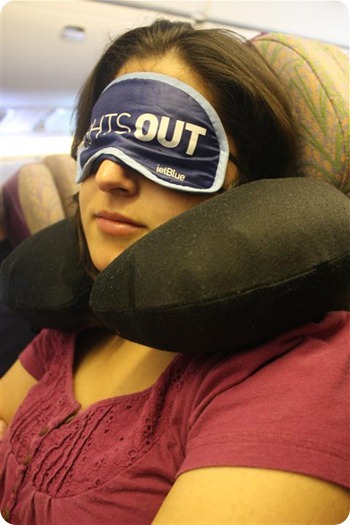 I woke up in time to get our first glimpse of the Pyramids from the sky.

Then we started to get REALLY excited that we were actually going to Egypt!!

We were definitely a little nervous, but we had an airport transfer from Contiki. They picked us up and brought us directly to our hotel (Hotel Victoria). I heard bad things about this hotel, but it was fine and we slept really well.

We were really lucky and have a friend of a friend who lives in Cairo, so she took us to have lunch at a restaurant called ‘Sequoia’, which is on the Nile. I played it safe and ordered a Pasta Dish. (In Egypt, I stuck to a ‘no veggies, no dairy, no meat’ rule to avoid getting sick).

At 7pm, we got to meet our Contiki tour manager, Sherif, and the trip officially began!

The next day, we woke up bright and early for our first day of sight seeing. It wouldn’t be Contiki without a bus!

There is something so fun about being with 40 other world travelers who are equally as excited about seeing Egypt as we were. This is our third contiki tour, and we were anxious for it to begin!

Sherif said to us: “Welcome to Egypt. You are going to see King Tut’s treasures and his golden mask, you will ride a camel around the pyramids and then go inside them, you will kiss the sphinx and walk on the Saraha desert—and that’s just today!”

Our first stop was the Egyptian Museum.

This houses all of King Tut’s treasures, his tombs and the famous golden mask. We also saw the mummies of many pharaohs, including Ramses II. We couldn’t take any pictures inside the museum, but we had a fantastic guided tour.

The museum is really old (1902) and really hasn’t been updated since. It was kind of a shame to see such history and priceless artifacts being displayed on rotting wood pedestals with poor lighting. But they are working on building a new museum that is slated to open in 2011. They are financing this new museum by ‘putting King Tut to work’. The traveling exhibit of some artifacts from his tomb is currently on tour in the US, and the profits will pay for the museum’s new home in Giza.

Then we hopped on our tour bus and headed toward the pyramids. The Nile was glistening in the sun. 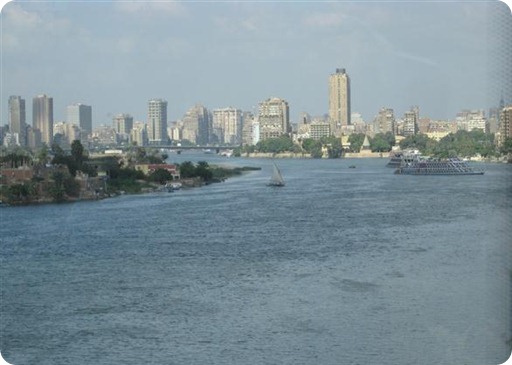 Cairo has 22 million people, and most of them live in cramped, dirty apartments. A lot of them don’t have windows or roofs because they live tax-free until the building is completed…. so there is no incentive to ever finish building them. There was a staggering amount of trash everywhere (including the Nile).

Over one bridge, we looked over and saw a bunch of camels in a courtyard. Sherif told us they were going to be sacrificed… sad! 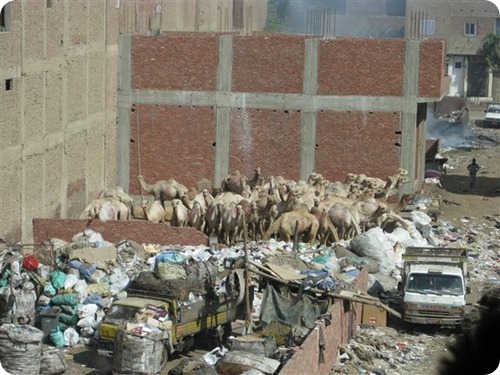 Just beyond the bustling city of Cairo, the pyramids started to appear in the horizon.

As we got closer and closer, they looked bigger and bigger.

I just couldn’t believe that we standing at the base of the pyramids. They were really beautiful.

Tomb robbers looking for treasures robbed them thousands of years ago. Here, you can see the original entrance, and one dug by thieves looking for the burial chambers.

As we walked around the pyramids, we came to the herd of camels waiting to carry us on a journey back in time.

Our entire contiki group went as one giant caravan into the desert.

The camel totally photobombed this picture: 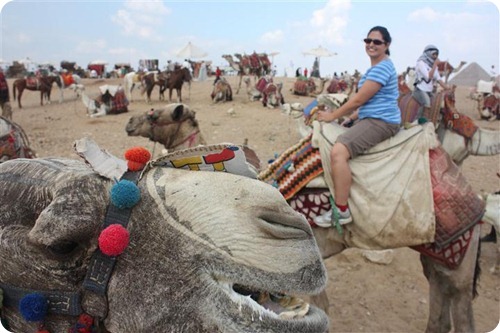 Anyone who knows me knows how much I fear horses…. and camels are even SCARIER! But who could pass up an opportunity like this? 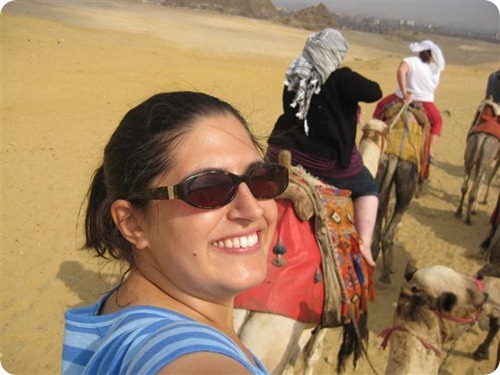 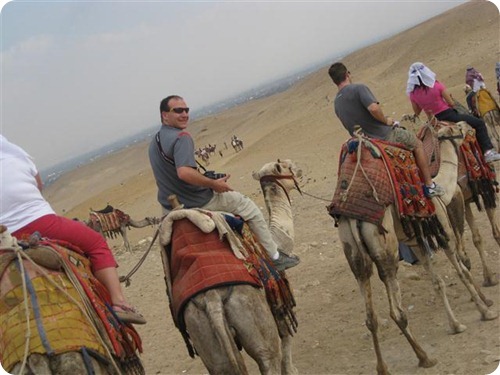 Doesn’t this look photoshopped? It’s not, I promise! Irving took this!

October was the PERFECT time to go to Egypt. It was 80 degrees out. They told us we saw the first clouds they had seen in months. 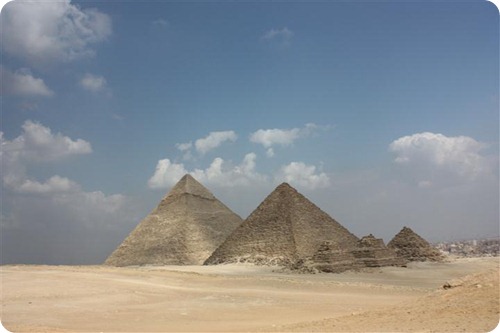 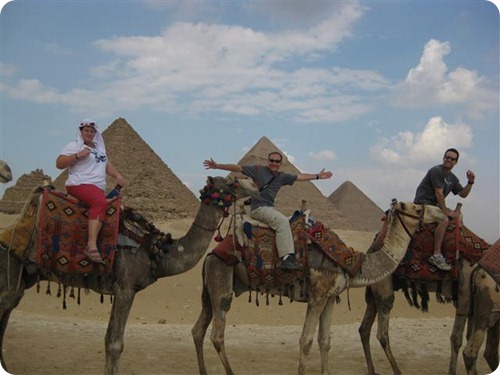 The three smaller pyramids were the Queen’s Pyramids. 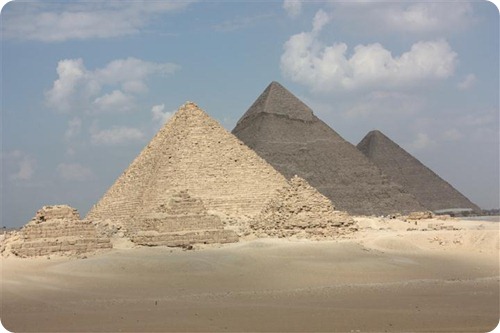 My camel was NOT behaving. I think he was in love with the camel next to me. 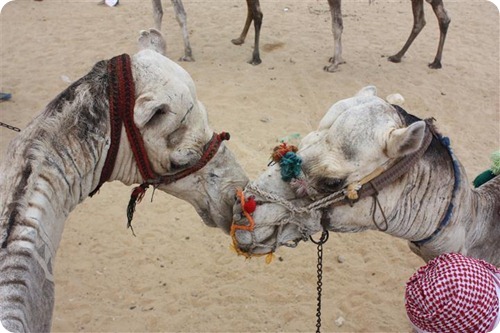 I was afraid to ride them at first, but by the end, we became good friends.

Then it was time to have a little fun with the pyramids. 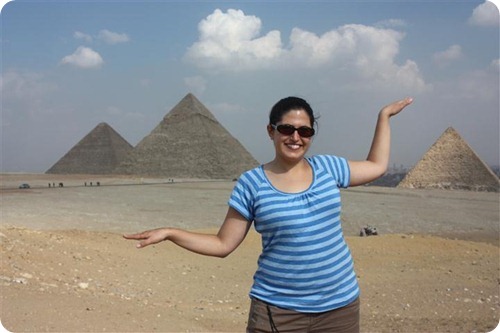 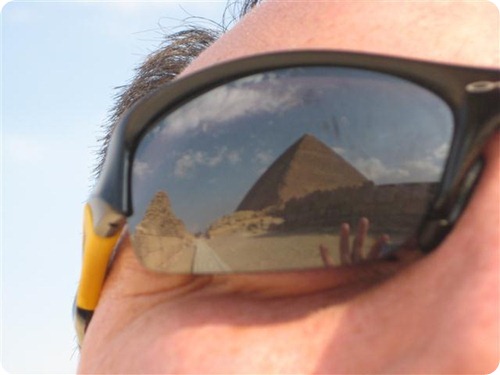 Look mom, we’re at the pyramids!! 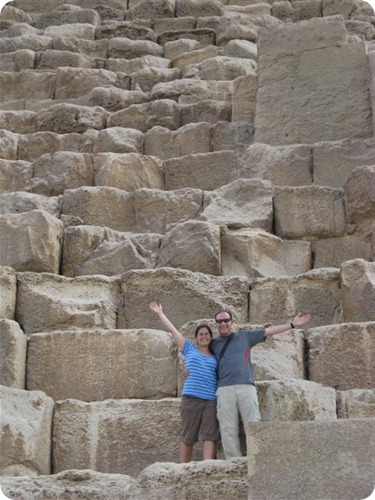 We were SO lucky, we got to go INSIDE the second pyramid! (money can get you anything in Egypt!) We walked down the burial shaft into the room inside. There was nothing in there anymore, but it was SO cool to say we went in. It was SOO hot and humid in there though. We stayed just for a couple of minutes and hiked back out. 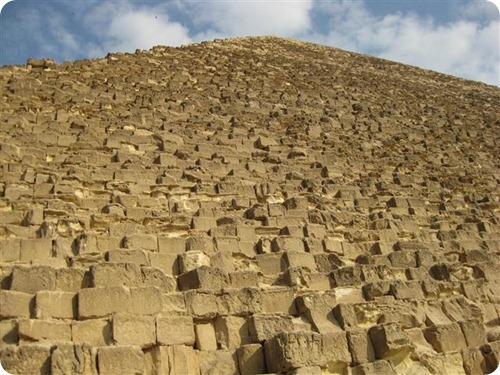 The pyramids are the only surviving ‘seven wonders of the world’.

Then we went to meet the Sphinx!

Reese, the gnome, got to kiss him! 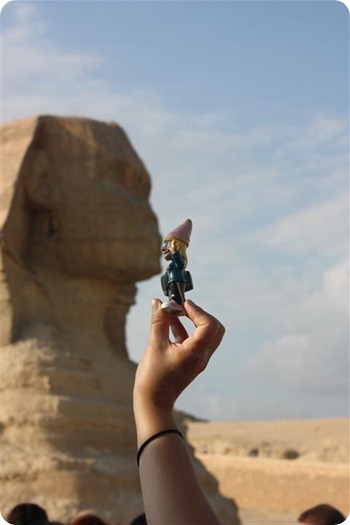 But I got one too!

If you’re keeping track, we didn’t eat lunch that day. haha If we stopped for lunch, we wouldn’t have time to fit everything in. So naturally, we had gummy bears when we got back on the bus. You gotta do what you gotta do, right?

Then we headed to a resort nearby to relax by the pool and clean up for dinner. 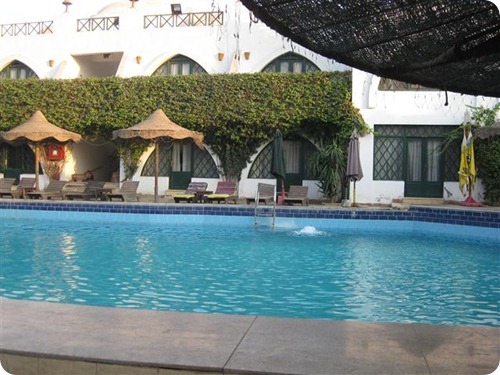 Sticking with my ‘no dairy, no meat, no veggies’ policy… the carb fest continued. (Believe me, by the end of the week, I was craving colorful veggies and fruits!)

The outdoor restaurant was really nice.

Next came the part of the trip I was dreading the most… the overnight train to Aswan. We rode ‘first class’, but by American standards, it was far from that. 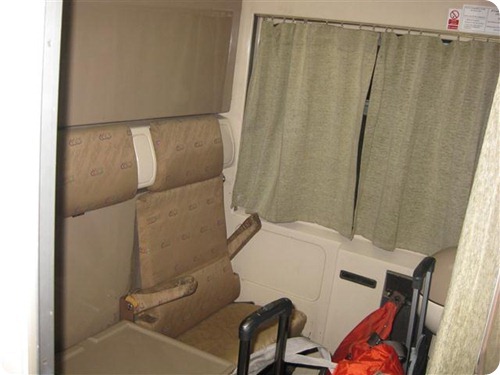 But with the beds down, we could barely move. It was fun though, and we actually slept pretty well.

We both brought travel sheets with us (which were the envy of the group, we highly recommend them!)

Don’t forget to enter the contest to win an Egyptian prize!

2 Responses to “Embarking on an Egyptian Adventure!”