We woke up in Warsaw and prepared for our all-day drive back to Berlin. This wasn’t part of the tour, but they offered a free shuttle back to Germany if you wanted (they had to get the bus back there anyways). We extended our trip to explore Munich and Salzburg on our own after Contiki was done, so the bus back was perfect.

But first. Breakfast! We had a great breakfast spread at the Marriott that had way more options than our previous hotels. They even had a few American-style items (pancakes and omlettes) that was a nice change from the usual rolls with jam and cheese we’d had prior. 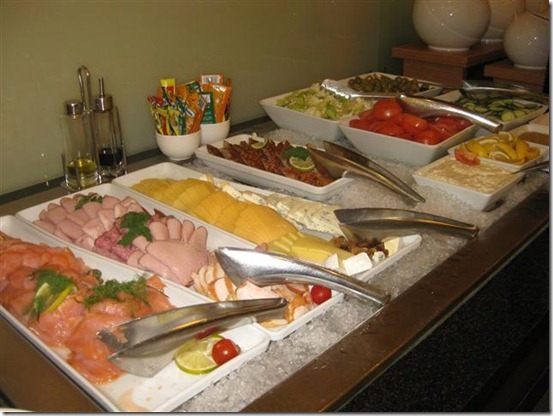 Then it was right on the bus to hit the road as early as possible. Special thanks to our tour guide on our trip, Meitek. He was from Poland and was entirely entertaining.

Only half of our original group opted to take the bus back to Berlin, so everyone had an entire bus row to themselves. SCORE! I lounged out and read The Hunger Games. (Don’t spoil the end for me though, I’m still reading the rest of the series!) A few hours later, we stopped for lunch at a rest area. I was surprised to actually see a decent looking salad there. It was really good!

See! I really did tried to sneak in some healthy stuff when I could… although I did balance it out with this. 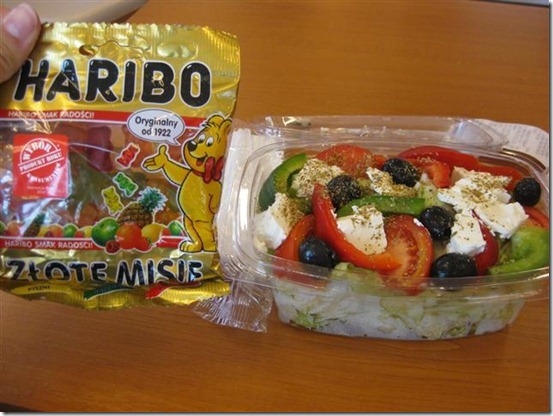 But tried to burn them off quickly by jumping up and down numerous times to get a good bus shot.

We love Contiki, what can we say? I am so sad this is the last bus day.

We got into Berlin around dinnertime and headed straight for the train station. We booked an overnight train to Munich from there. 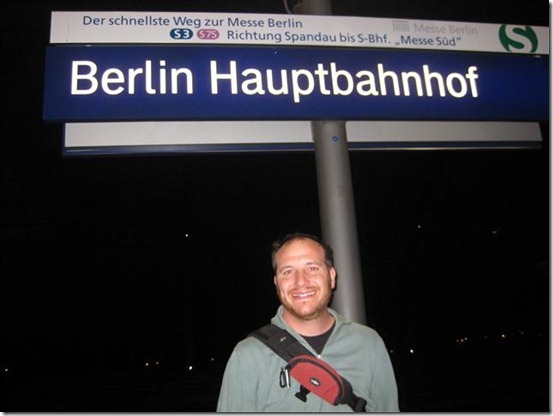 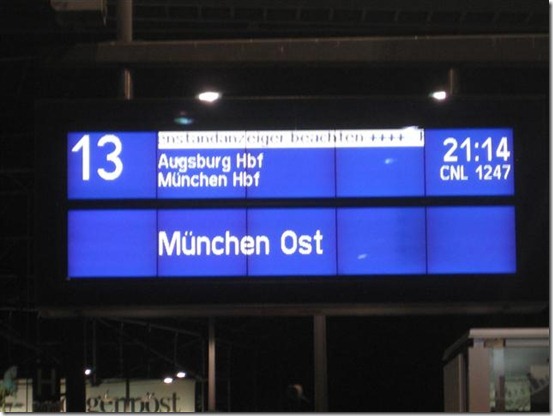 We booked this train months ago through Distant Lands in LA (a store that we highly recommend, by the way). We would be sleeping in a 6-bunk couchette and we were praying we wouldn’t have to share the room with wierdos or scary people. 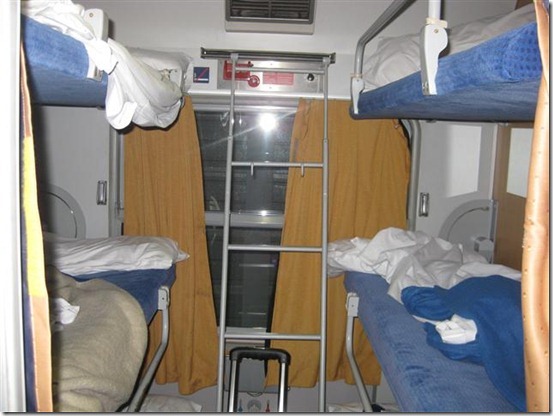 We each had the top two bunks and it was crazy hoisting all of our stuff up there with barely any headroom. We were laughing so hard.

Turns out the other four beds were filled with some elderly Germans who thought it was just the funniest thing. They were laughing and talking in German to tell us to turn the light on, turn the light off, lock the door, unlock the door. I had no idea what they were saying but they were very impressed that we brought our own travel sheets. Either that or they were making fun of me for doing so. Don’t laugh. I have no regrets! (Although sleeping in your jeans really stinks. But I still slept through the night, hooray! 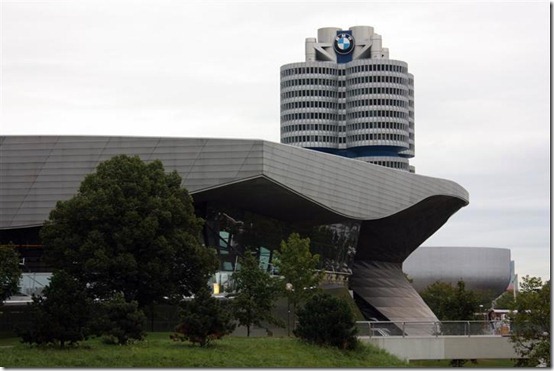 Here they have one of the BMW factories and also an extensive collection of their finest cars. I sat down and let Irving do his man thing (aka look at cars).

His favorite was this car commissioned by Steinway pianos.

Next we made our way in the rain around the corner to the Munich Olympic Park. 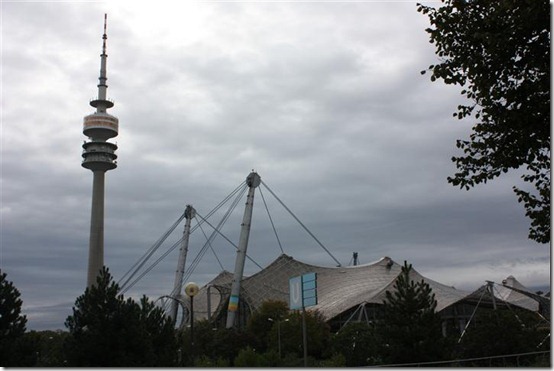 Munich was the home of the 1972 Summer Olympic games. The design was extremely modern for the times (and still looks impressive now). 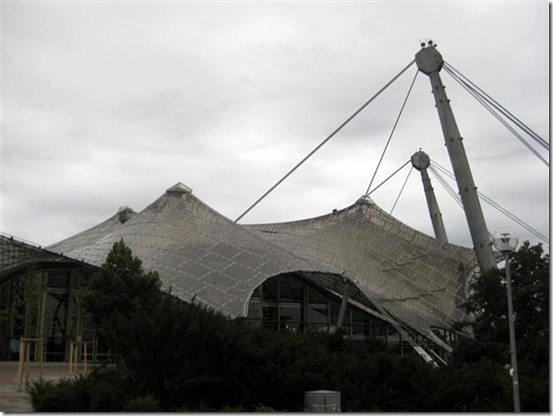 In order to get the most out of the park, we opted to do an audio tour of the grounds (well worth it too).

The aquatic arena was exciting because this was the place that Mark Spitz won all of his medals. He was the guy that Michael Phelps was aiming to beat in Beijing.

If you look close, you can see his name below in a few places:

Also in the park is the big television tower that was renamed the Olympic Tower. We didn’t go inside, but we’re told it had impressive views from the top. 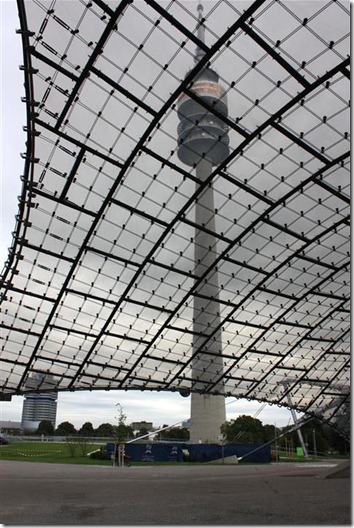 When the park was built, they had long term plans in mind for making it accessible to the public. It’s really pretty now and they use it for all kids of events. 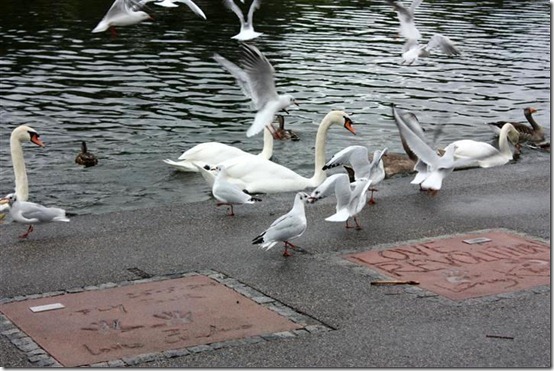 These Olympic games were really unique because it was the first time that Germany was hosting them since WWII. The games had been in Berlin in 1936 when the Nazis were in power, and Munich was ready to show the world that this was a different Germany now. 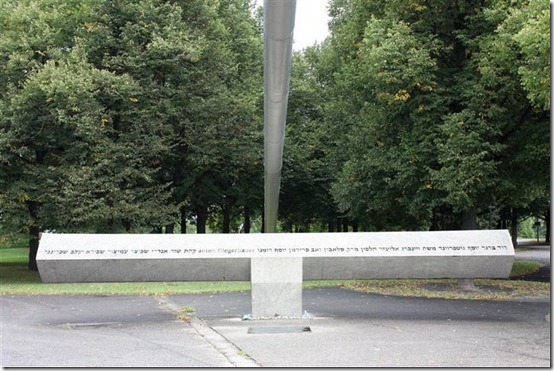 However the games quickly turned tragic when the Israeli Olympic team was taken hostage and then killed by a radical Palestinian group. It was a very sad event and was a great loss to the world. 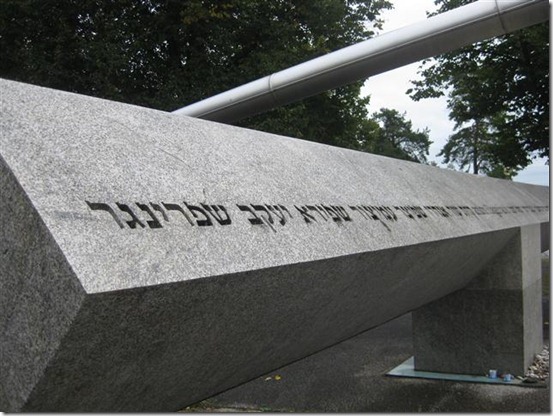 This was the apartment that the Israeli team was staying in when the kidnappers broke in.  I always think of the Olympic games as a reason for the world to come together, this tragedy is so unfortunate and I was glad we got the opportunity to pay tribute to those athletes.

After our audio tour, we had lunch inside the commissary. Schnitzel for Irving (of course, right?!)…

And some pasta for me.

And then we jumped on the metro to head to our next sight: Allianz Arena. But first, a little fun in the train station!

There was a mirror on the ceiling that we used to take some pictures! 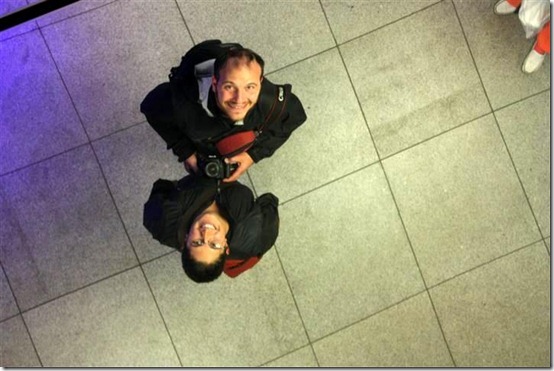 Someone nearby thought we looked funny and offered to take a picture of us looking at the ceiling. LOL 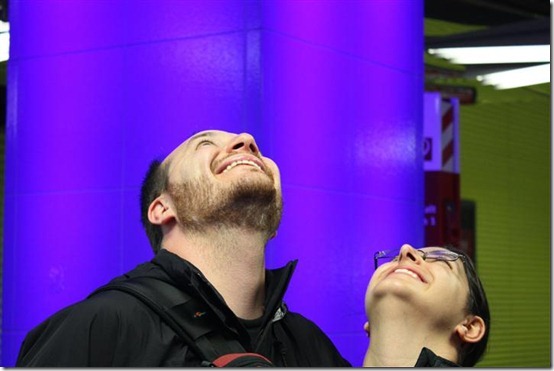 Then we arrived at the stadium, just in time for the last English tour of the day.

This is where two of Germany’s biggest soccer teams play: FC Bayern Munich and TSV Munich. It was also the site of the 2006 FIFA World Cup. As you can imagine, Irving was in heaven.

The tour was great and we got to learn a bit about the stadium and the teams. 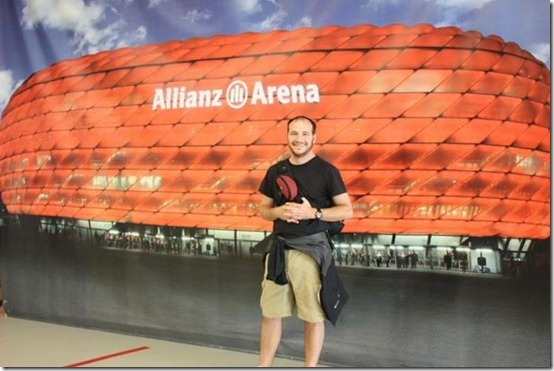 After our tour, we headed back into Munich for another (!!) tour of the city. Stay tuned!

One Response to “Munich: Stadiums and Arenas”