After a fun morning in Munich, we found ourselves back into the center of old town completely alone. What? No tourguide? No bus waiting for us? No itinerary? It’s really no wonder we love Contiki, we need a little structure to our traveling or we get anxious we’re going to wander around and miss something important. Some people like to travel like that, but I prefer to check sights off a list.

Munich is like the crazy younger sibling to Berlin. It’s a little wild and crazy and trying to be different. Bavaria used to be it’s own state and has such unique characteristics than than the rest of Germany. It was previously ruled by a long line of crazy dukes before the outbreak of WWI.

This is the famous Glockenspiel right in the heart of Marienplatz. It only goes off three times a day, and we weren’t there when it did, but from what we hear, we didn’t miss much. It’s cute though. 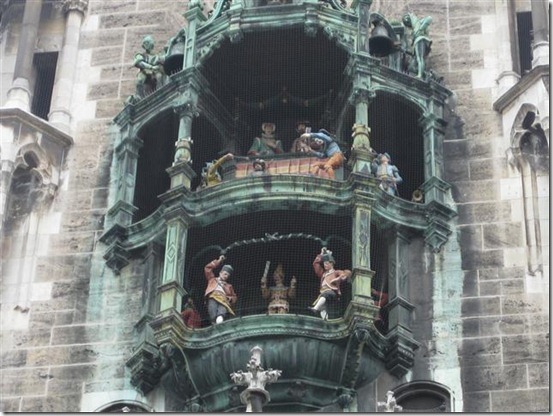 But at the base of the clock, we met up with a free walking tour (Hooray! More tours! I was so excited!) When you have someone explaining what things are and why they are important is so much better than walking around with a map and wondering why I should care. We had a great guide.

He was excited to point out this funny sign to us too. Parking for dogs! huh? 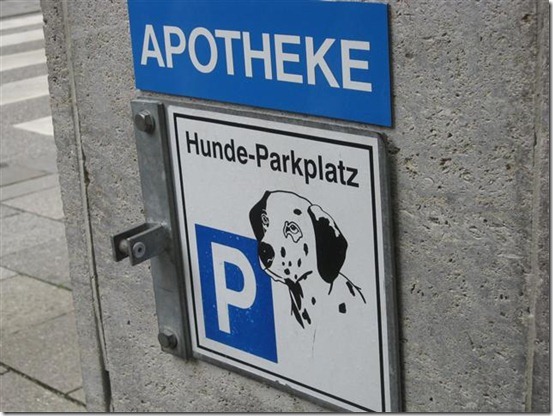 One of our first stops was to see the Frauenkirche Church, also known as the Devil’s Church. There was a rumor that the devil had commissioned it and demanded it have no windows.

However as you walk inside the church, you realize there are lots of windows hidden behind each of the pillars.

The church was bombed with the rest of Munich by the Allies in WWII. During the raids the church was destroyed. After the war, the Jews of Munich gave money to help rebuild the church. As a way of saying thanks, there is a menorah painted on the ceiling if you look closely.

Nearby was another church that was also rebuilt after the war. Piece by piece they reassembled it exactly as it was…

And if you look closely, you can see a medieval cannon ball lodged in the sides. They made sure to place it right back where it was.

We also learned on our tour that the people of Munich looooove Michael Jackson. We passed a rather large memorial to him with all kinds of tributes on it.

Then the tour took us back in time a bit to when the Nazis were vying for control of Munich. Hitler was gaining popularity and the Nazis were rallying for support. This led to the Beer Hall Putsch in 1923 when Hitler tried to overthrow the government. He was later thrown in jail for his actions, at which time he wrote Mein Kampf. 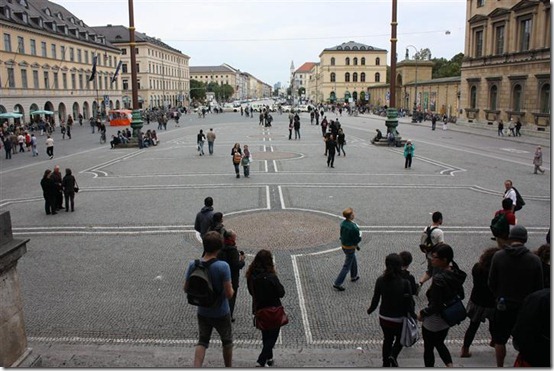 During the Putsch (which means “coup d’etat” in German), 16 Nazis were killed, along with four policemen. Later when Hitler was out of jail and clearly in control of Germany, he erected a memorial to be placed in a public square in this place.

See below what it looked like in the 1930s. Hitler required that anyone who walked by give the Nazi salute. Of course the residents of Munich were angry about being forced to salute a regime that they didn’t support. So in protest, people started avoiding the monument by walking around it instead of past it.

Anyone caught walking the alley instead of going past the wall was then captured and probably tortured or killed. A subtle memorial now remembers those people who tried to resist the regime. It’s a path of gold bricks to represent the route they chose to take. 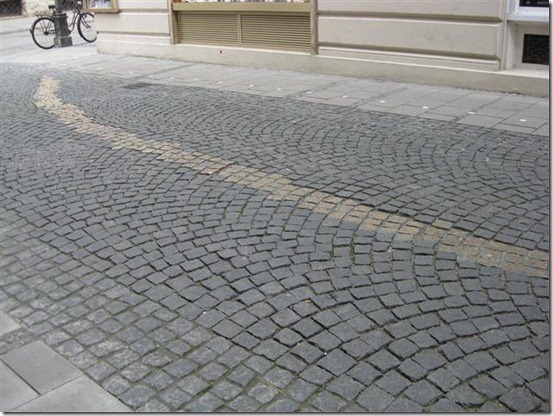 Despite learning about the sad more recent history of Munich, we also learned about the happy traditions, and the city’s great love for their beer. It made sense then to head over to the Hofbrauhaus after our tour. 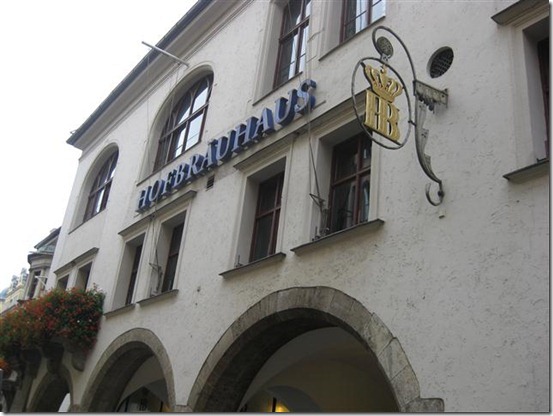 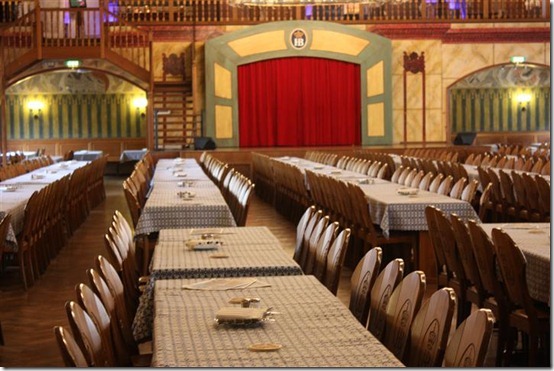 I know it’s super touristy, but Irving and I are the ultimate tourists and were excited to eat there.  Inside, it’s set up with long tables and you are encouraged to sit next to strangers. We found a seat next to some people from the UK and had fun chatting with them about their travels.

When in Munich… get the beer. We ordered a liter to share and it was pretty amazing. 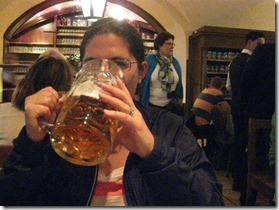 Irving ordered some sausages that he said were pretty great. [EDITED TO ADD:  he actually used the  phrase "amazing" and "that was the best sausage I have ever eaten, in my ENTIRE life."] I got a potato casserole that wasn’t anything special, but still pretty good. And we shared the bread basket of rolls and pretzels. Tip: Order the pretzels from the girls that walk around and not from your server. The ones from the kitchen are half the size of the ones the girls have. 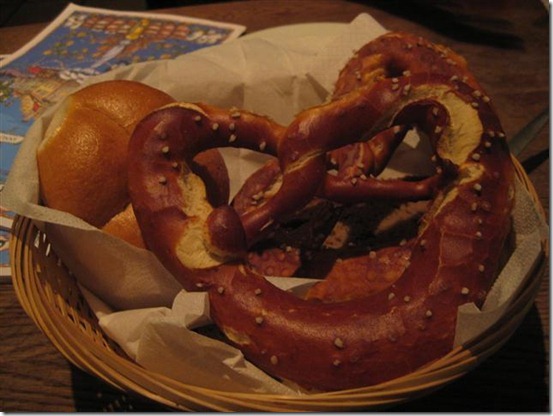 On our way out we heard some German Folk Music playing inside. Such a fun, festive night on the town. We only had one day to do Munich and I think we definitely made the most of it. Tomorrow, we rent a car… wish us luck!

6 Responses to “Munich in A Day”