Here is the last of my Zion posts. If you are catching up, here’s what you missed:

Tuesday was our last day in Zion, so we made the most of it! It took us a couple of hours to get two adults and one baby dressed, fed and packed up. We tried to pack light, but it still ended up being about four trips the car! Babies have a lot of stuff. Some of which we didn’t even end up needing –ahem, Pack N’ Play, I’m looking at you.

Anyways, all the effort to get out the door early paid off when we realized we had exceptionally perfect weather for a hike.

Whoo hoo! Baby loves her sweet ride! Our destination this time were the hikes around the Emerald Pools. It’s supposed to be a loop, but the middle of the loop was closed due to ice so we did it in two separate parts so we could see the whole thing.

Usually this is a waterfall, but it freezes when it gets cold. 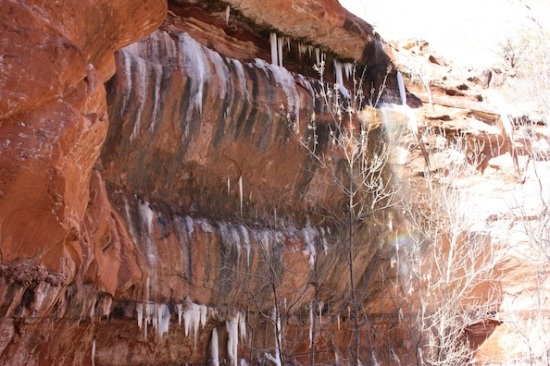 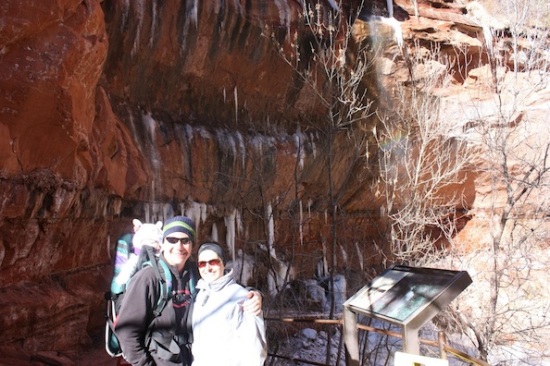 Although it would have been awesome to see the waterfalls flowing, I much prefer the 50*-60* temperatures over the 110* it can be in the summer!

On our way around the second side of the loop, we found our own “Narrows”. haha 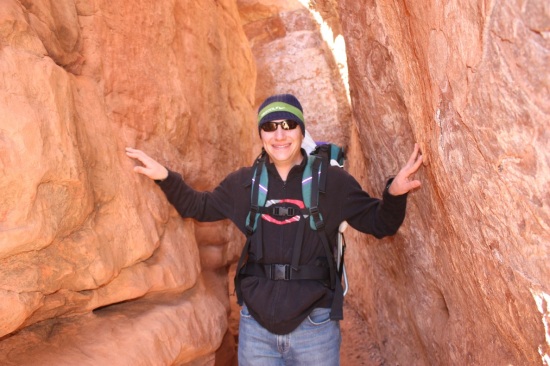 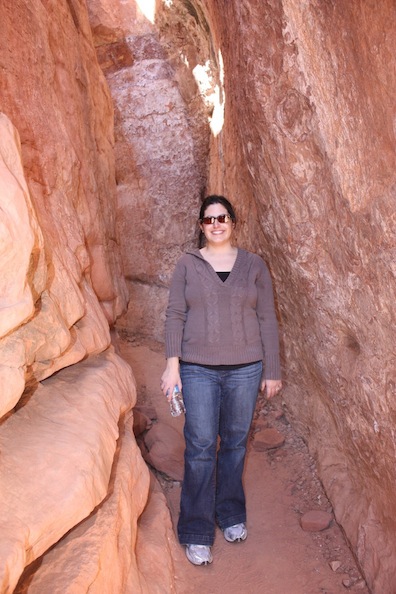 It’s hard to get a family photo when Adele can’t see over Daddy’s head. lol But she was there!

The frozen pools were so neat. The camera really doesn’t capture the contrast in colors in the park.

Towards the top of the hike, the trail turned to sandstone stairs…

…that led us to the Emerald Pools! (I’m told in the summer they are much bigger).

But still impressive nonetheless. This picture was taken on top of this waterfall that we saw earlier, the water literally just falls off the edge of the rock.

We did it! We hiked to the top of a waterfall with a 7.5 month old baby. 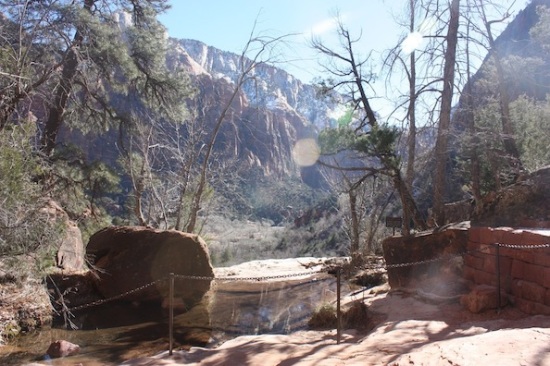 On the way back down the mountain, we had a great conversation about how we want to raise Adele and all the cool things we want to expose her to as she grows up. Over the past year, we’ve encountered a lot of naysayers who told us that we’d never be able to travel once we had a baby, and it made us proud to look around at where we were on that trail to say “Yes. We have a baby. And we’re traveling. We’re doing it!”

PS. Icicles and Cactus on the same trail? This place is crazy.

Zion definitely impressed us. We had a blast. It was so nice to get out of Los Angeles and into nature. It was only 7 hours away, but it felt like a whole different world there. So what’s next? Yellow Stone? Kings Canyon? We’re already scheming our next National Park adventure.

Comments Off on Zion: Waterfalls and Emerald Pools