When my sister was in town last week, we didn’t do touristy Hollywood things. Instead, we went to the library and the playground and enjoyed the time with Adele. 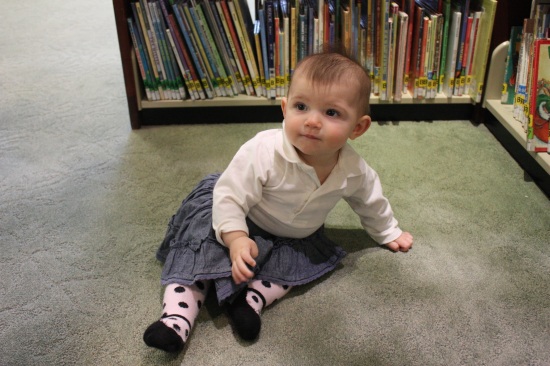 Fun Fact: Adele’s shirt was the first one I bought when I found out I was pregnant! I figured a white collared shirt could be for a girl or a boy. hee hee

Our library has a great children’s room with puzzles and toys for the babies too! I HAVE to get this one

for Adele. She played with it for such a long time, I eventually had to take it away so we could leave! It has all kinds of locks and doors. Babies love opening and closing things! Melissa & Doug make the BEST toys.

Another little baby wanted to play too (you can see his arm in the photo below!) And as soon as he came over, Adele turned around and sat on TOP of the whole game so he couldn’t see it. Rude! Clearly we have to work on sharing.

Always with the tongue out too. I think that’s hereditary… my mom and I both do that too. lol

After the library, we headed over to the park! 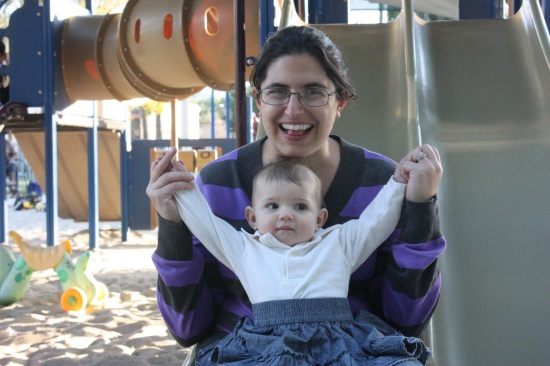 We thought it would be fun to watch Adele crawl through the tunnel so I went on one side, and Laurie went on the other.

Seemed innocent enough. Adele thought it was the best game ever. 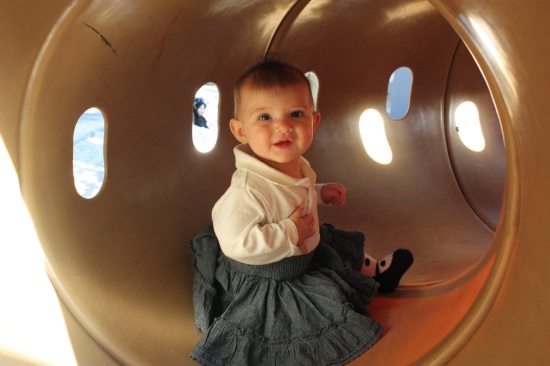 So she just sat there…. 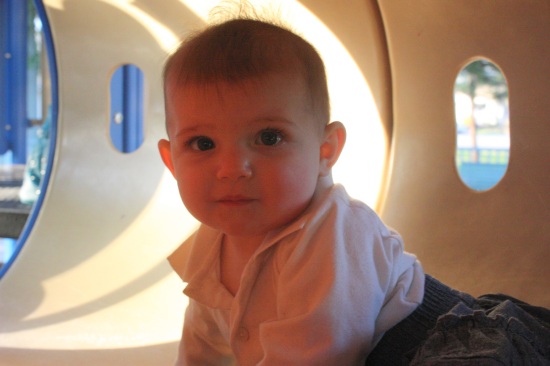 ….until it was clear that she wasn’t going to crawl to the other side. She was too far in for me to grab her, so Laurie went in for the rescue.

Adele was just laughing at Aunty Laurie, but she still wasn’t budging. We tried some verbal negotiations, but she wasn’t having it. 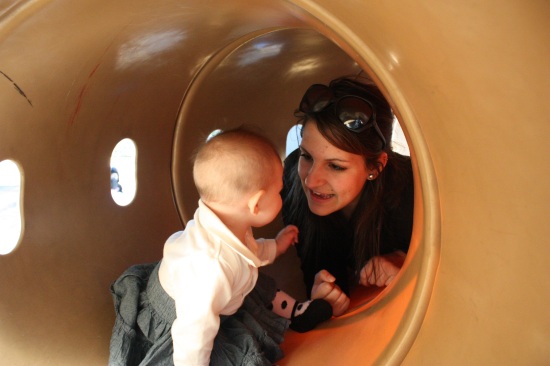 Then Laurie starts screaming “OMG, someone is hitting me! Someone is hitting me! Adele, move! Some kid is pushing me.” And Adele is laughing and laughing. Laurie is panicking because some little kid is getting a little too close for comfort and I’m dying on the other side taking pictures of the whole ordeal. I couldn’t even reach in and grab Adele because I was laughing so hard. I couldn’t see the kid behind Laurie, but I could hear him yelling “Hey, hurry up! You’re blocking the tunnel! Hurry up!” Don’t worry, eventually everyone got out safely.

Oh man, that was funny.

Annnyways, that night, Laurie agreed to babysit so I could go to Yoga!! (Thank you!!) And I came home to this….

Comments Off on The Playground Chronicles