When I last left you, we had just arrived into Xi’An on an overnight train from Beijing. As soon as we grabbed our luggage, it was back on a new bus and ready for a new day! 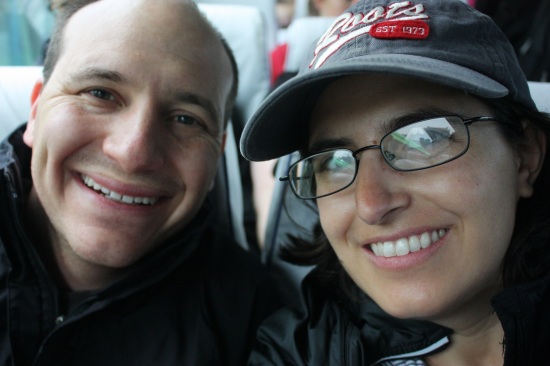 Our guide for Xi’An (pronounced: Shee-han) was Ken. Hi Ken! He gave us a brief introduction to this little city and we headed over for breakfast in our new hotel.

This was the Skytel and it was located really close to the ancient city walls.

Maybe we just got to breakfast ‘late’, but I wasn’t too impressed at the spread there. Only a few ‘western’ options… but the ‘eastern’ options were that great either. I mostly ate carbs and watermelon.

Our tour continued on to an ‘art museum’… i put that in quotes because it really was just a glorified store where they give you a condensed lesson and then try to sell you things. This was becoming a trend on this Contiki tour… one of my biggest (only?) complaint was that we felt that we missed out on actual sight seeing because we were forced into attending these disguised shopping excursions.

A painting dedicated to the ‘one-child policy’ law that China has become famous for.

But the one cool part about visiting this ‘museum’ was that we got a Chinese calligraphy class for free. They taught us about all the strokes that make up the Chinese characters and then we got to practice making them. 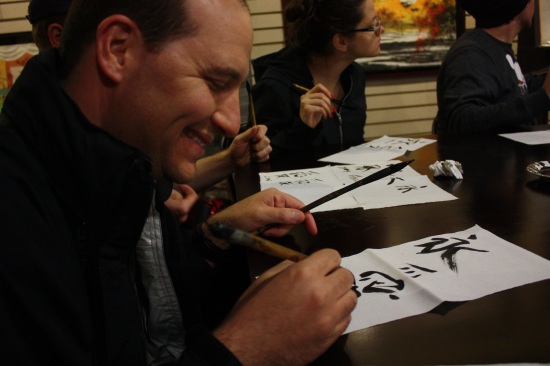 Beautiful, no? Kind of makes me want to take Chinese, it was really fun!

Maybe on future tours, they can offer a half day calligraphy class as a trip add-on. I would have gladly paid to be able to paint more, that was fun! 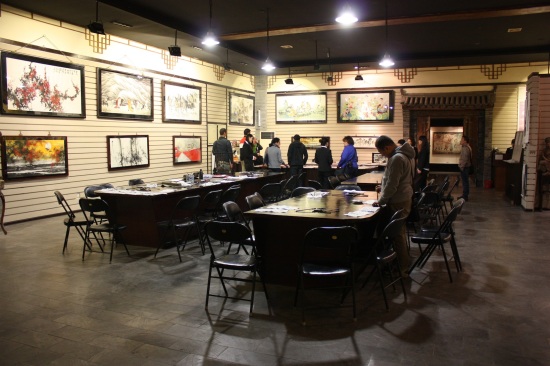 After that detour, we were more than ready to visit the star attraction of Xi’An: The Terra Cotta Warriors! In 1974, a farmer was digging for water when he came across some artifacts. After they excavated, they found an army of 8,000 terra cotta (clay) soldiers that dates back to 200BC. The farmer who discovered them was hailed as a local hero. He now works in the bookstore autographing books about the soldiers. He’s getting older now, and we saw him slurping noodles at his desk. You’re not allowed to take pictures of him though. But it was cool to see him!

There are three large pits you can visit to see the Terra Cotta soldiers, and likely many more that haven’t been unearthed yet. The army was intended to protect the Emperor in his afterlife. They were all lined up underground in rows leading up to his tomb (that mound in the background of the diagram in the photo below). 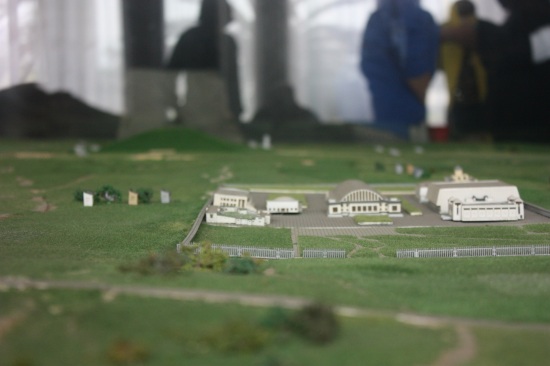 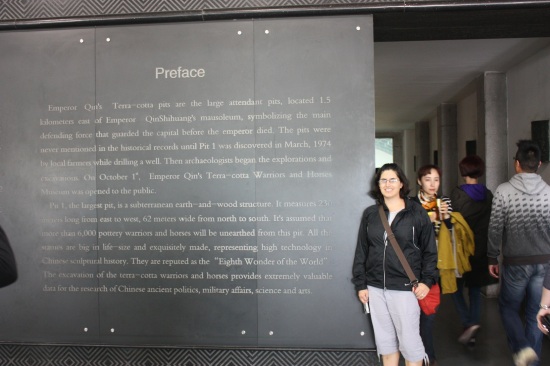 Standing on the overlook above all of the soldiers was breathtaking. The sheer number of them was impressive. Let alone the detail and work that went into making each one of them. These massive pits had alternating rows of soldiers and rock. There used to be beams of wood that went across the entire area, and roofs were put on top of them. Over time, the wood decayed or caved in, crushing all the men below. None of them were found in tact. Each one had been painstakingly put back together, piece by piece, by archeologists. 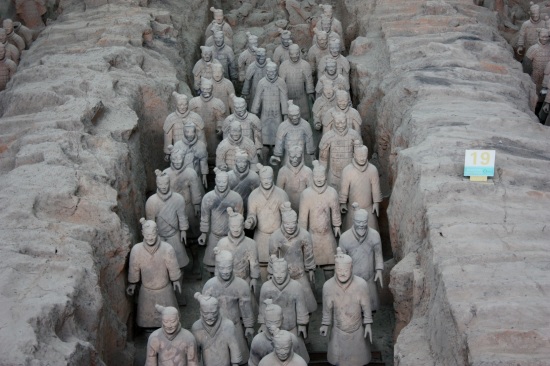 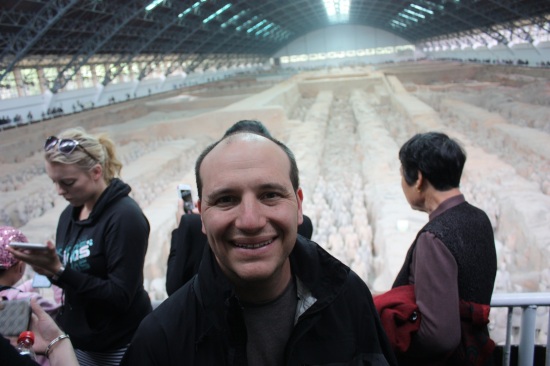 Keep in mind, this is only one of the pits we visited! Look how massive it is! It’s believed that almost all of the artists and laborers who worked on them were all killed. The Emperor didn’t want word of the army to get out. After all, it wasn’t intended for anyone to ever see, it’s sole purpose was to protect him in the afterlife. 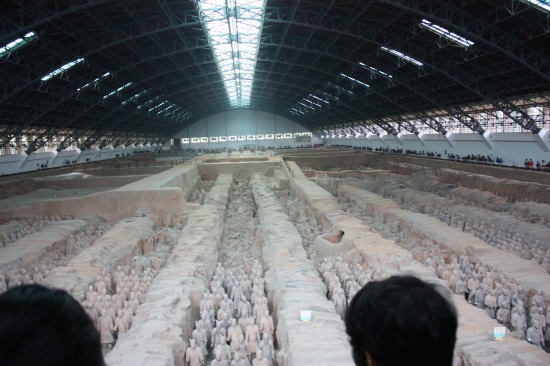 Each one is life-size, and no two are alike.

There are still many, many, many soldiers still being put together by scientists. 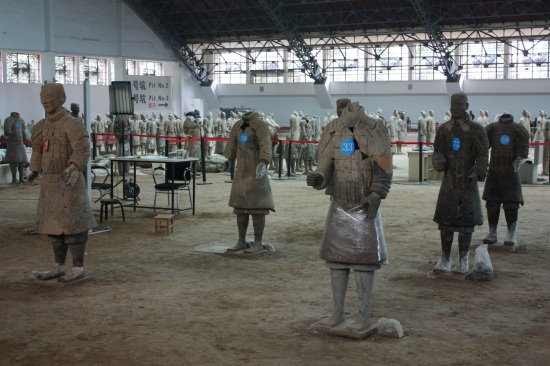 All of them faced away from the tomb, to guard it from intruders. 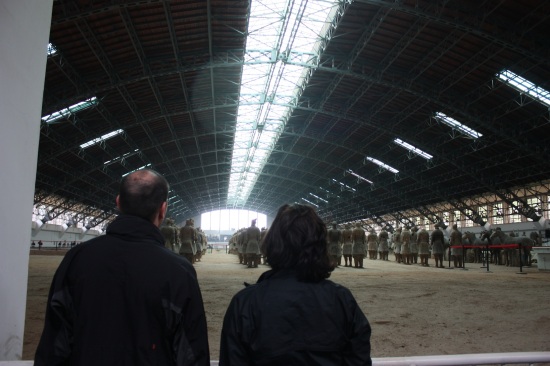 They found out that they were not constructed from one piece of clay (it would have weighed too much and been physically impossible to construct. So they were assembled in pieces. Here’s an example of bodies that have been put back together and are still awaiting their heads. Also in this picture, you can see that their hands used to be holding something. All of them were originally holding weapons (spears, bow & arrows, etc). Those were made of wood and have since decayed. 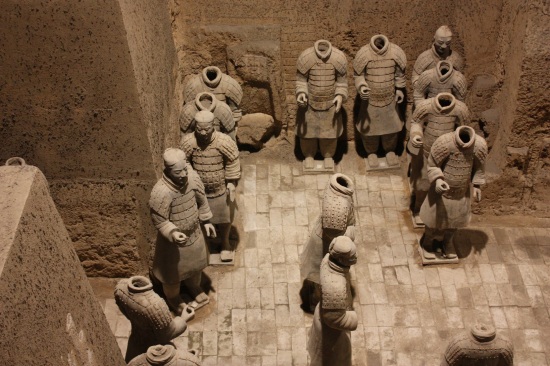 They even made horses and chariots! This Emperor thought of everything! In a nearby pit, they also found musicians, artists and shopkeepers too. Just in case. =) Apparently he also created rivers of Mercury around his nearby tomb to simulate water… and it is rumored that he even drank Mercury too. Could explain a lot, I think! 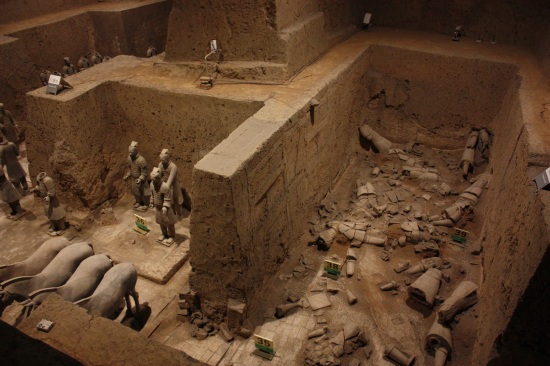 Here’s a good picture of what the roofs used to look like. This is a section of the pit that hasn’t been unearthed yet. You can see how they covered them up originally. This wood must have petrified into the earth for it to still be visible. 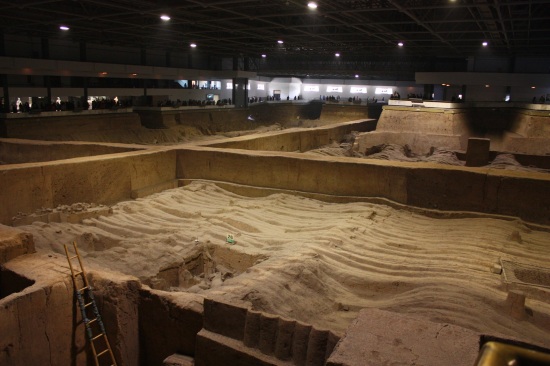 Check out the detail on each one of the soldiers. These are just a few well-preserved examples:

Each one was painted in brilliant colors, but when they excavated them, the color literally peeled off after being exposed to the air. 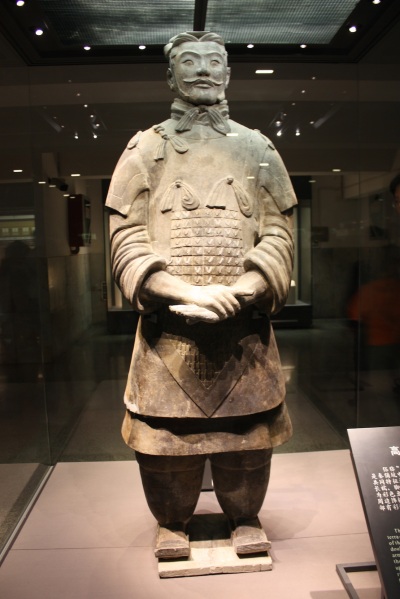 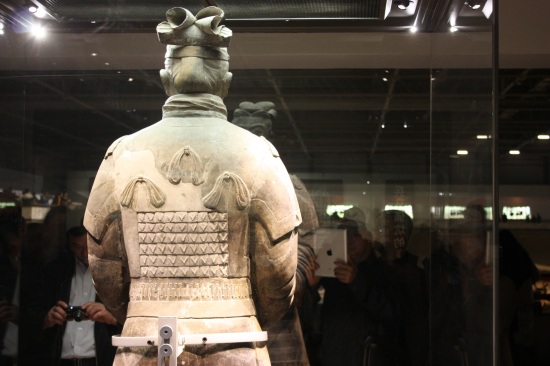 Once we were done admiring this incredible place, we headed to lunch.

I’ll admit, it was a touristy lunch place that caters to large groups— but they get major points because they had a “Noodle Demonstration Station”… which was actually a machine…dressed as a person…slicing noodles into a bowl. I am not kidding. 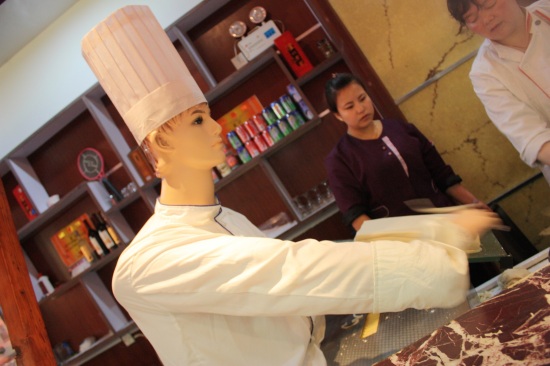 And he made good noodles too. I went back for seconds!

We also had our usual lazy-susan style fare as well. lots of vegetables and rice. 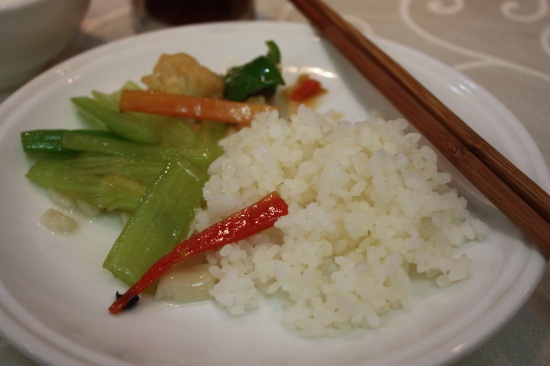 And let Xi’An be known as the only place during our whole trip that served dessert… Sugared Honey Potatoes. It tasted like fried dough. I think I was the only one at our table who liked it, but it was pretty awesome.

Then we went back to our hotel to finally check in. After sleeping on a train the night before, this was a welcomed stop. We freshened up and got ready for an exciting night out at the Tang Dynasty Dinner show! That deserves its own post, stay tuned!