Today, we took the metro to the Dubai Mall. This is the largest mall in the world. It is huge and inside, they have an amusement park, aquarium, ice skating rink, stores, restaurants and more!

Here’s the ice skating rink, right next to the food court, no big deal. haha My favorite part is the Zamboni cleaning the ice. 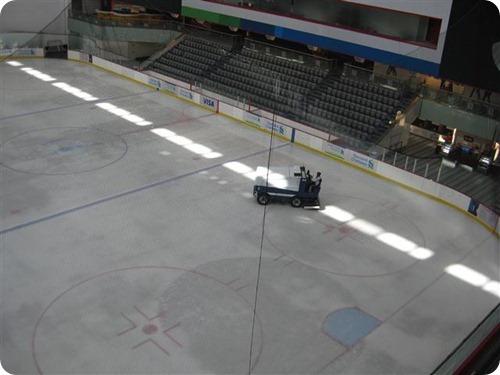 Also attached to the Dubai Mall is the Burj Kahlifa. This is the tallest building in the world. The tallest man made structure ever built.

On the 124th floor, they have an outdoor observation deck so you can observe Dubai from above. You need a reservation, and we made us for early morning. The elevator that takes you to the top goes up three floors per second! Only 1 minute to get to the top! 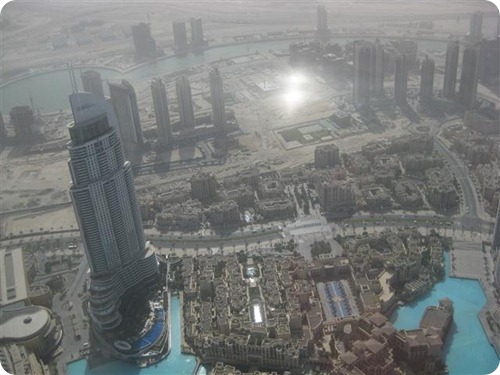 There are SO many huge buildings in Dubai that you kind of lose perspective on how high up we really were.

It looks sandy and smoky because of all the desert sands in the air. It was quite hazy from the top. 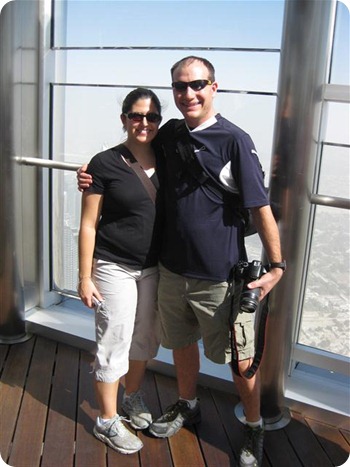 Then we had lunch in the food court. I found some awesome arabic food. I love how available this good food is here! Don’t let anyone tell you Dubai is expensive. We found everything to be pretty reasonable.

After we came back down, we went to check out the aquarium in the middle of the mall. 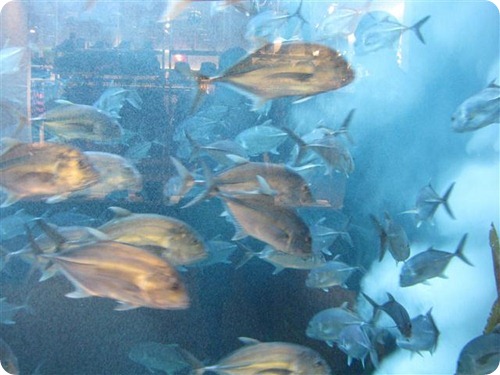 We were joking that Dubai always has to have the biggest, the oldest, the first, etc in everything they do. The aquarium is no different. This is the world’s largest single piece of acrylic used for the tank wall.

There are so many different fish inside, including SHARKS!

Even though you can see the tank from inside the mall, we bought a ticket to get a closer look at the other tanks inside. 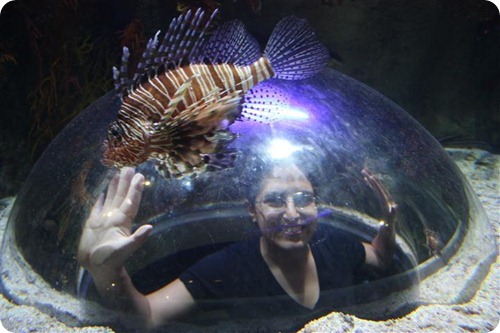 And like little kids, we had to climb on all the fun rope bridges! 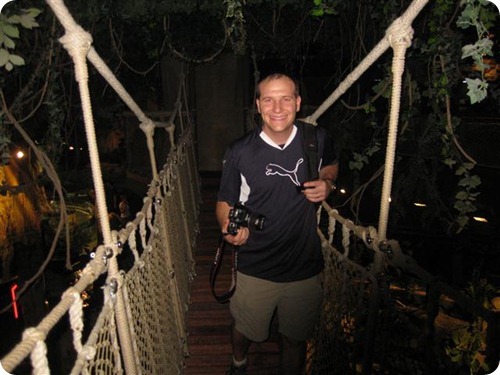 They even had penguins! And it actually snows inside their tank!

In the middle of the tank, there is a cage where you can pay to snorkel…inside the aquarium…inside the mall! (think about that… snorkeling in an aquarium? You can’t do that in the states. lol)

So…when in Rome… Irving opted to try it!

He’s braver than me. I’m very afraid of swimming with fish, so I waited outside the tank… in front of Chili’s Restaurant. hahaha. this place is so weird!

It was hilarious watching Irving swim around in a giant fish tank.

There were all kinds of tourists around me saying “is there someone swimming in the fish tank?” And I was laughing saying “that’s my husband!”

We brought the underwater housing for my camera and he took it in the tank with him. 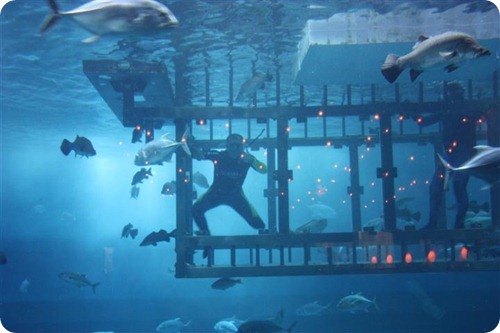 After our morning in the mall, we headed out on a desert safari! There are so many companies that do the same type of tour, but we chose to go with Big Bus Tours, since we had a good experience with them earlier in the week. Our driver was an Iraqi who grew up in Basra, Iraq. He was very nice, and we had a great time.

First, they take you an hour out into the dessert by SUV, where there are great sand dunes. We were really close to Oman!

And Irving fell asleep on the drive. (Remember I promised you I got a good picture of Irving sleeping?) haha BUSTED!

Then the driver deflated the tires a little in the truck…

And the Dune Bashing began! 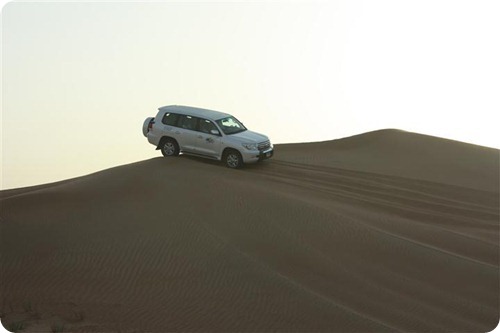 Inside, I was hanging onto dear life, but it was SO fun!

You drive full speed up the dunes and then come crashing down on the other side.

Every once in a while, they stopped so we could take pictures of the Arabian sands.

The sun was setting, so our pictures came out really good. The perfect amount of sun. 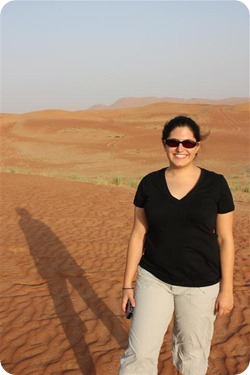 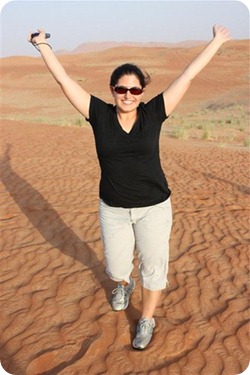 The sand was so red and so soft. Exactly what you’d imagine!

One one dune, we looked over, and there was a caravan of camels walking through! 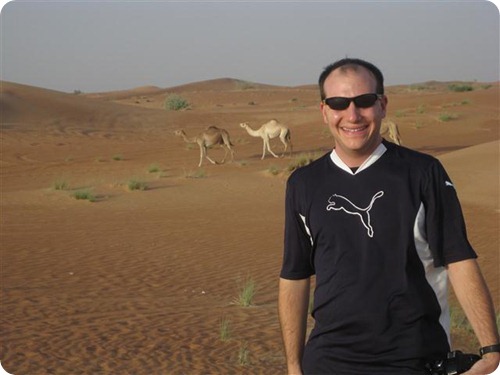 At one of the stops, our driver gave us some water. Look how they package it! It’s like a jello cup!

As the sun was setting, Irving snapped one of favorite pictures of the whole trip. We call it “Kelley Jumping off a Dune at Sunset”. 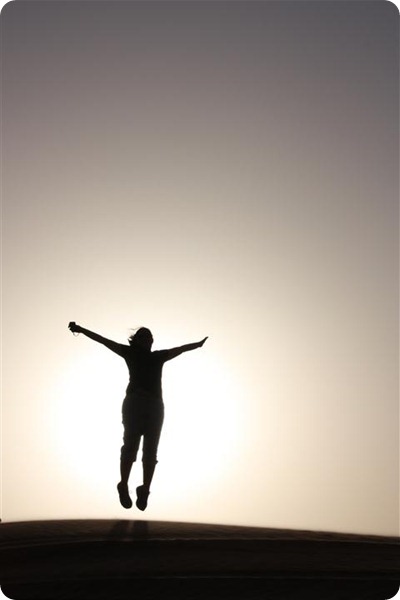 This was the perfect Arabian Night!

After the sun went down, we pulled into a fort in the dessert. 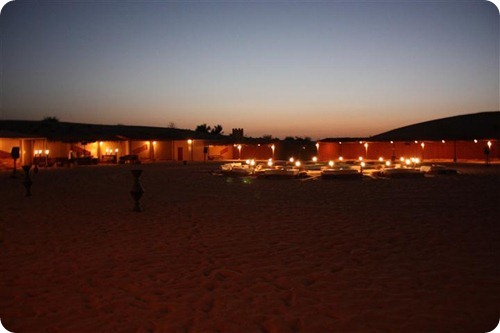 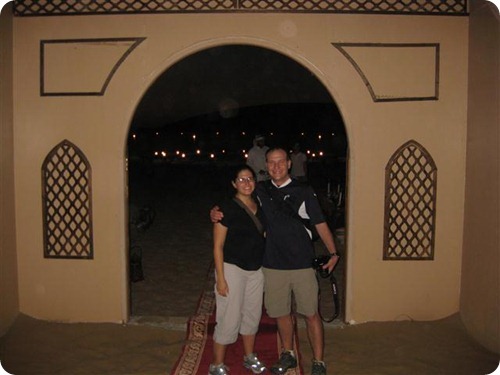 They had all kinds of fun things to do (all included in the tour). Irving rode a camel for the first time!

And I got a henna tattoo!

Then they had some traditional Arab clothes you could dress up in. 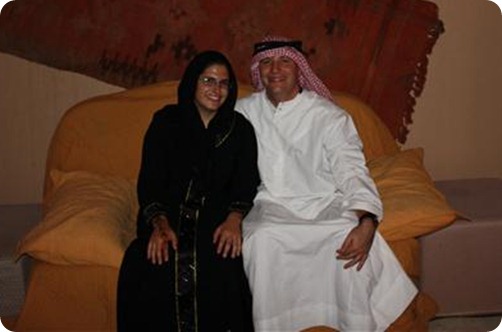 They also had a real falcon you could hold! 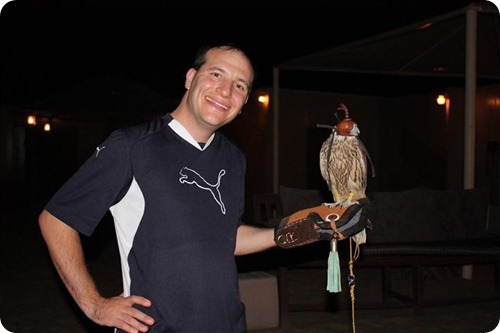 Before our dinner was served, we relaxed with the Sheesha Pipes. Just a little bit of the apple flavor.

Dinner was served buffet style, and we sat on cushions on rugs on the sand. The food was really good, and the bread was being baked right in front of us! 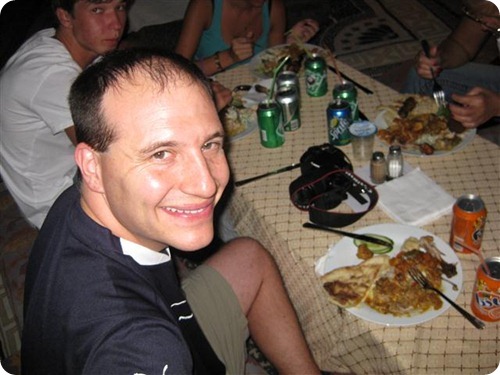 The night culminated with a great Belly Dancing show!

On our way back to Dubai, the drivers were having a little playful fun passing each other and playing with their headlights. We even went over some dunes in the pitch dark without our lights on… that was scary. haha There really aren’t any driving rules it seemed. They pull off into the Dunes wherever they want and then come back onto the highway. It was a fantastic experience, and definitely a highlight of our trip.

4 Responses to “From the Sky to the Sea!”