Four Months. 17 Weeks. A third of a year! I can’t believe how big she is already. (I have a feeling I’ll be saying that a lot over the next few years!) It just feels so surreal. The first few weeks were pure survival. The next couple of months we were still trying to get used to our new roles as parents. I had many moments where I felt inadequate or unprepared. But the past few weeks have been amazing. Adele is on a schedule now. She sleeps at regular intervals, we can predict her mood and know how to play with her. Month four was huge! 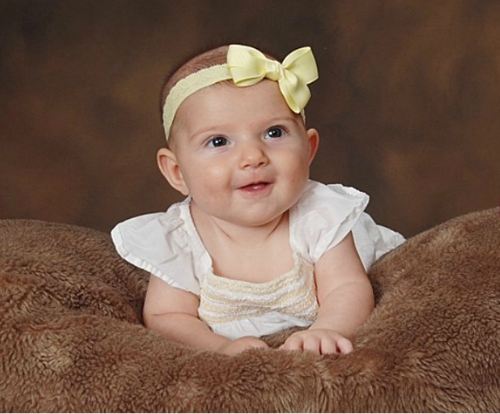 The biggest change this month is that we can distract her now! It’s easy to hold her attention with toys, songs or funny faces. She’ll stop what she’s doing to look at us. When she cries, we can sing and she’ll stop to pay attention. We can manipulate her mood with silly voices. This has been extremely helpful in the car too! She no longer screams bloody murder in the car seat. In fact, she actually enjoys it now. She looks out the window, she plays with her hanging toys, and she smiles when we sing to her.  I have an Old MacDonald Pandora station on my phone and computer now. It’s crazy how all those old childhood songs come back to you when you hear them again 20 years later. Down by the bay…. Where the watermelon grows….. 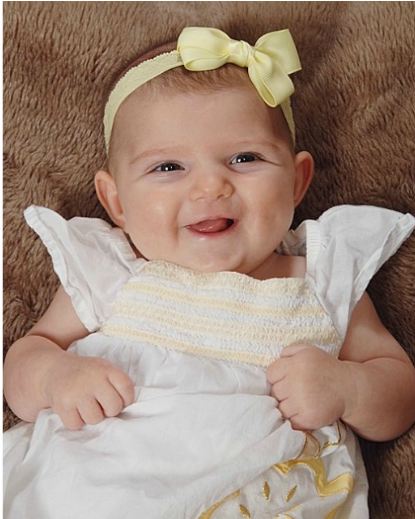 She continues to be curious about everything around her. She loves to see what’s going on. She turns her head to look across the room. She smiles at strangers. She turns her eyes to the sky when she hears helicopters. She’s just so observant. Exactly how I wished she would be. I love watching her focus on objects…to see her learning and comprehending.

One of my favorite moments is when she grabs for her piggies. Every time it’s like it’s the first time she’s seeing them. She’s so intrigued by those little wiggling things. And then put footie pajamas over them and it’s the craziest thing she’s every seen!! 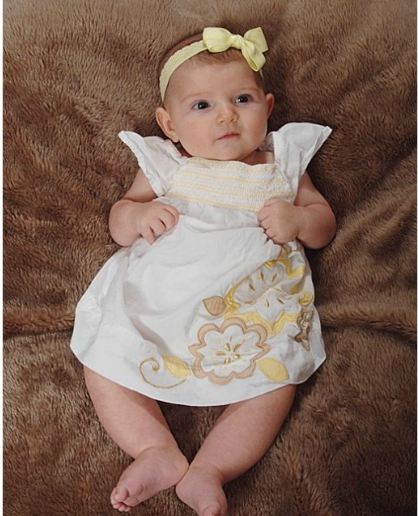 She loves tummy time. She’s always had a strong neck from week 1. She could hold her head up pretty good from the very beginning, but now, she’ll actually play on her tummy too! She can shimmy her way all the way around in a circle. She often wakes up on the opposite side of the crib I laid her down in. In fact, one day this week I woke up to find her on her TUMMY! She had rolled over all by herself from back to front!! I was SO proud. Of course once she got there, she didn’t know how to get back. Poor girl was so confused. 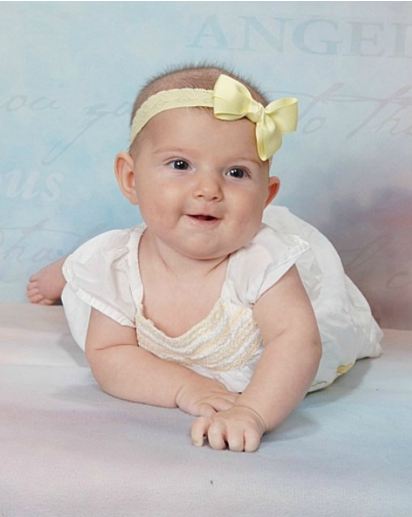 Speaking of sleeping. BIIIIG changes this month!! No more swaddle! I started with doing one arm out for a few days and then finally decided to nix the swaddle all together. Her hands don’t fly up anymore, so she doesn’t wake herself up. They say you’ll just know when it’s time to stop swaddling, and it just felt right. We stopped when she was three months old and haven’t looked back. Now she’s loving the sleep sacks! 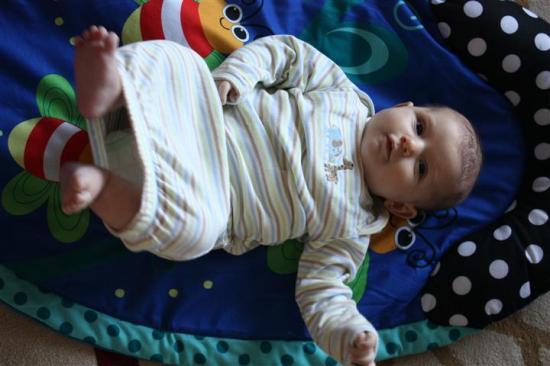 And guess what?! I don’t have to rock her to sleep anymore either!!! For nearly four months I rocked, bounced and jiggled her to sleep every.single.night. She’d have to be in a deep sleep for me to put her down or she’d wake up and cry. But now, I lay her down, put on some music and she snuggles up into her lovey and falls asleep. The first night it took 45 minutes (and a little tired crying), the second night, it was 30 minutes. And the third night she fell asleep in seconds. In SECONDS! What?! And every night since it’s been the same thing! I’m amazed. Love that girl!

She’s still using white noise all night long, but I’m not ready to wean her off of that yet. She’s still sleeping 12 hours a night straight! Still! 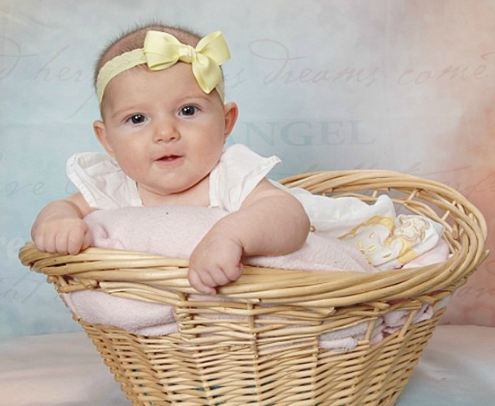 So what is her schedule like now? Here’s a run down. It’s pretty much the same every day. She’s like clockwork. We’re not strict parents who watch the clock and force her into a routine, but it sort of just happened that way.

Her naps used to only be 45 minutes long. And some of them still are. But we’re finding she does take 2-3 hour naps here and there now! It won’t be long before it changes to just two longer naps a day instead of three shorter ones.

Now that I’m back to work, she’s in daycare now. She is loving it. When I pick her up, she’s all smiles. Her face lights up when she sees me. She laughs at her teachers and loves watching the older kids running around. She’s been in a great mood and seems to enjoy it. (I’m loving the balance too. I feel like a real mom now packing her lunchbox and organizing all her things every day!) 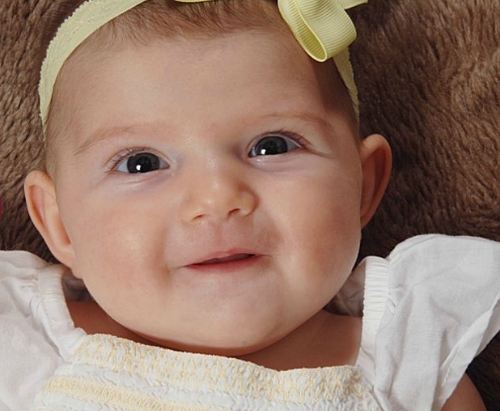 She’s eating between 25 and 32 ounces a day. Usually 4-5 bottles of breastmilk and the occasional bottle of formula too. I’m pumping to provide her with as much milk as possible, but some days we still need to supplement a bottle or two. It’s working out great for our family. She’s getting the benefits of my milk, but I’m not stressing over whether or not I have enough anymore. She’s happy, sleeping and gaining weight. Can’t ask for anything more! 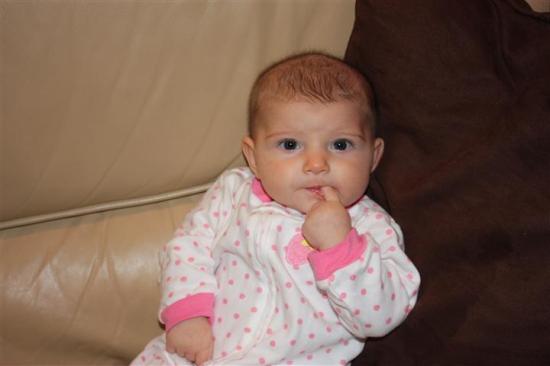 She loves sucking on her fingers. She hasn’t found her thumb yet, but those fingers are always in her mouth. I think it’s super cute. She’ll take a pacifier for a few minutes at night, but doesn’t really love it. Fingers taste better apparently.

Her hair is growing like crazy! I love spikey baby hair! 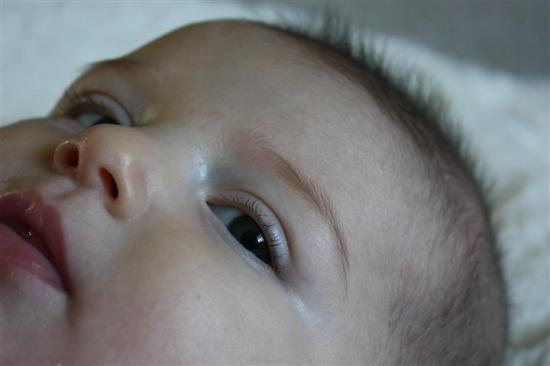 She started holding things last month, but now she really understands that she can play with things in her hands. She loves different textures: plastic, furry, soft, rubbery. It’s so fun to see her explore.

Other tid-bits from month four:
-She has been falling asleep while nursing at night now. I cherish those moments because I know they won’t last forever. I love seeing her drift off into la-la land while being so close to me.

-She’s chatty! She coos, laughs, shrieks and squeals. And now she even blows strawberries. Sometimes she’ll laugh so hard she coughs. She also giggles after she sneezes now too. She’s has a great sense of humor.

-She’s still loving the bath. It’s one of my favorite times of the day.

-She’s still loving the playmate and the exersaucer.

-Her new thing is sitting up (assisted). She LOVES to be in the sitting position. We don’t have a bumbo, but I have a feeling she’d really like it if we did. (Bonus: The sitting position allows her easy access to her piggies!)

-She’s still loving being outside. We go for evening walks sometimes and she is always so calm, looking around and breathing in the fresh air. She also likes days in the park. When I was home during the day, that was often the highlight of our week. I miss hanging out with the other moms, but we’re squeezing it in on the weekends when we can. 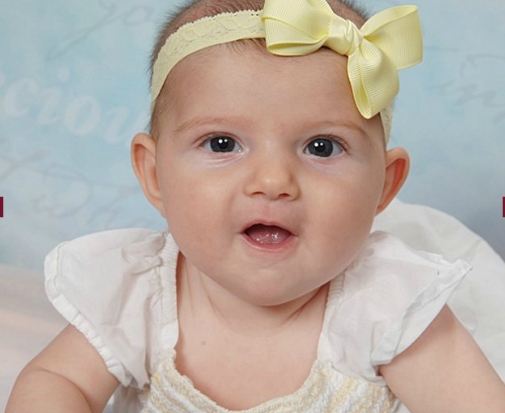 That sums up month four! Told you it was a big one! We expect her to be rolling all over the place in the next couple of weeks. I love her so much. More than I ever thought I could. This month everything fell into place. My baby blues have FINALLY gone away for good. It was a tough couple of months for me emotionally, but I’m happy to say that it finally feels right. I am loving this.

3 Responses to “Adele is Four Months!”