Filed under: Baby,Los Angeles — Kelocity @ 4:10 am
Tags: Los Angeles, Outside the Box, Playgroup

We took Adele to a class at Outside The Box on Monday. It’s a playgroup inside a mall near us that offers unique educational classes for babies. From their website:

“Outside the Box is an educational and developmental program consisting of facilitated classes which focus on brain  development for infants, toddlers, and young children through multi-sensory stimulation and specialized learning techniques.  Focus is placed on cognitive development and reached through playful and fun activities which foster attachment and bonding and create neural synapse activity the brain.   We play with a purpose!”

I signed us up for the ‘Older Baby’ class, which is for babies who are crawling but not yet walking. There were about five babies in the class that day and it was SO much fun. Adele seemed shy at first, but she totally opened up by the end.

We started the class by singing songs and doing motions with our hands. But instead of typical baby songs, we sang new songs… in Spanish! It was very fun.

I get to do songs in my mommy-and-me classes, but it was new for Irving so I enjoyed watching the two of them participate together too. 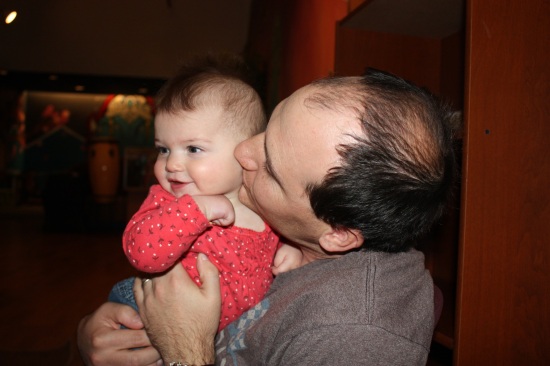 Then our sensory play began! We listened to tribal-type music and played with silk scarves for a few minutes. The parents threw them in the air and the babies touched and grabbed them. Lots of pretty colors were flying around.

And then we moved on to Magic Carpet rides! All the babies were placed on a pillow on top of a blanket and the parents dragged it around the room in circles. Surprisingly, the babies didn’t fall off. It’s a great exercise for their balance and coordination. Adele was giggling out loud. She was LOVING this.

Sure, Adele didn’t fall off, but somehow her right sock did in the middle of the ride. haha 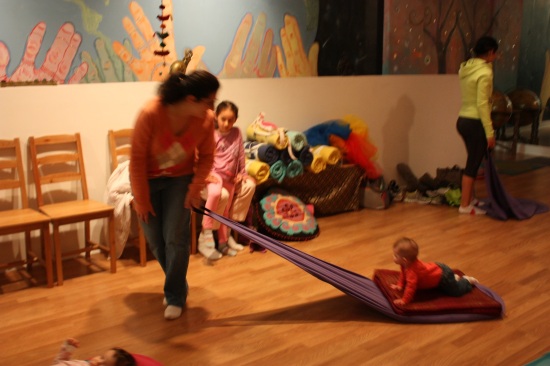 After this, they brought out a kiddie pool filled with biodegradable packing peanuts for the kids to play in. Adele was hesitant at first, but then warmed up to the idea. 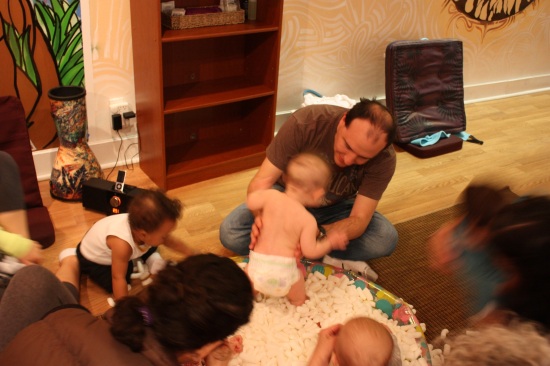 They said we could put them in their diaper so they can feel the textures on their skin. It must have been a neat experience for a little baby.

And as if that was enough stimulation… they threw in some Mardi Gras beads too! It was like Christmas in there!

After this, we did a drum circle and the kids had a blast banging on big loud drums and swinging tambourines. And we ended with a laser light show and light up super balls. Picture fifty oversized balls all blinking and glowing in the dark — all at once. It was cool even for the parents!

We all had SO much fun at this place. We will be back! I hear they have Pasta Parties once a month too. They fill the kiddie pool with cookied pasta (coated in olive oil) and they let the kids play inside of it! They also have Jello Parties where they get to swim in Jello!!!! Seriously, think about that. How awesome would that be? These kids are so lucky!

One Response to “Outside the Box”