Well, I know I haven’t written in a long time… its been crazy. I have been so busy…. With all these travels and such, there isn’t time for a computer lab! Just kidding… Ok, here is the deal….last weekend (more like 2 weekends ago) I went to Prague. It was amazing. We saw where the Czech Revolution took place in 1989 when they broke apart from Czechoslovakia. I went shopping and bought myself some nice Crystal wine glasses that I can have forever, they are soooo nice. Everything in Prague is like half price of anything else in Europe, so we had a great time. We stayed in a really nice bed and breakfast place for 9 euro a night. It was great. We saw the Charles Bridge and Castle hill. Dara and I went to an opera, it was Cosi Fan Tutte. It was really good, it was in Italian. 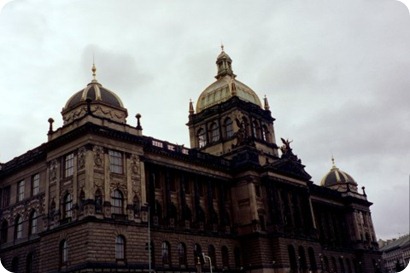 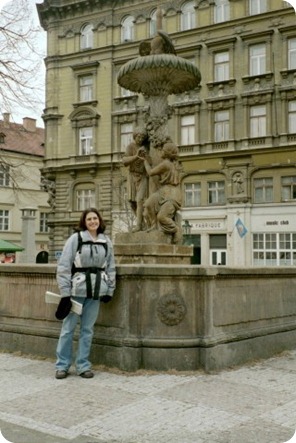 Me, in front of a fountain in Old Town. 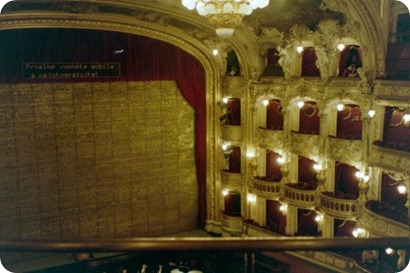 What a Beautiful City! 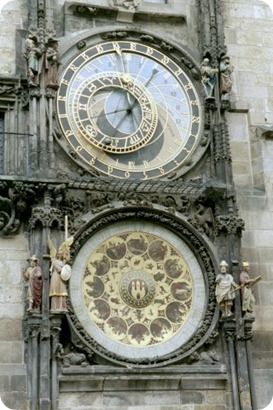 The famous clock in the old square

The famous street (I think where people partied in the street after becoming free? 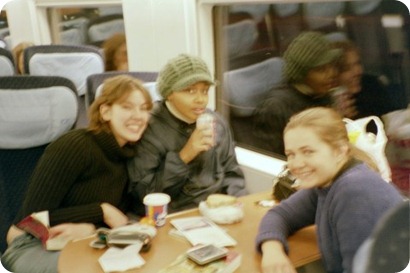 On the ICE train! (those are the BEST trains in Europe) 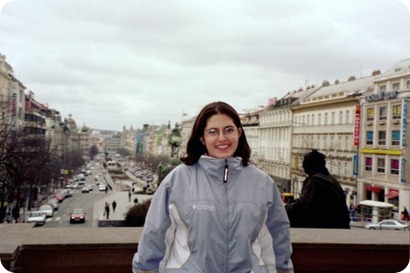 At the Museum of Natural History

In one of the cathedrals. 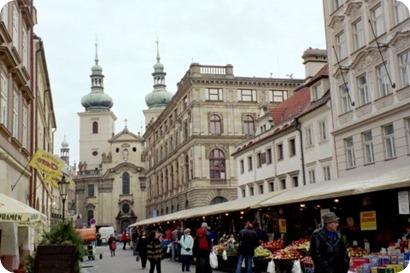 View from the Museum of Natural History

This past weekend I was in Heaven. No literally, it was heaven. Whitney and I went to the French Riviera. We visited Nice, Monaco and Cannes. Of all of them, Monaco was definitely my favorite. It was amazing.

We got up at 5am and learned that we bombed Iraq… perfect timing as we head into France. We grabbed a bus to Venlo and a train to Paris… I’m so tired.

In Paris, we take the metro, change stations and grab a 12 hour train to Nice. We get there at night and find our hotel: Hotel Astrid. It’s a bed and breakfast that Whitney found, it was nice (and cheap). We walked around at night for a while (in T-shirts because its so warm). Then we got dinner at a Chinese food place across the street.

The next day, we got up and walked down to the beach… 2 mile pebble beach!!! The water was blue and green, it was like Aruba! 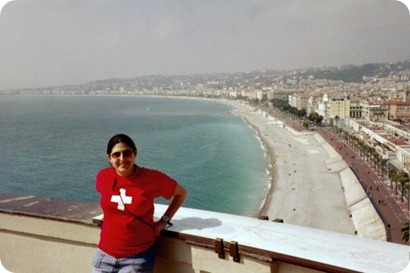 We walked to La Chateau and climbed a billion and one steps to get to the top of this cliff. It gave us the most amazing view of the coast. It was really pretty. On the top was a waterfall that we walked around. We also saw the largest cemetery in France. The tombs were really elaborate and detailed.

We then walked to the Farmers Market and bought apples… mmmm…. Again.

We got a train to Cannes, the train went along the coast and it was so pretty to see the water. Here, we saw where the Cannes International Film Festival is held (it’s a pretty big deal to me!) We went shopping for a bit (window shopping since all the stores were Gucci, Versace or Armani). After that, we went back to Nice! 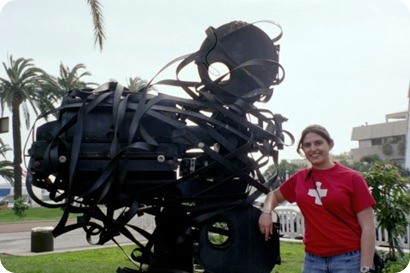 The next day, we got up and took a bus to a small suburb north of Nice.There, there was an Archeological Museum, that was apparently free for the month of March (BONUS!!!) It was a cool museum, it had ancient ruins from the Romans when they occupied France. It was a bunch of ancient baths and you could actually walk through and on the ruins, usually you cant do that, so it was cool. 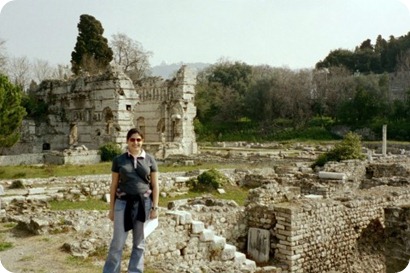 Then we went to the Matisse Museum. He is my new favorite artist. He was great, I loved the colors he used and stuff (this museum was also free!) From here, we got a train to Monaco, the best place ever. It was beautiful, when we got off the train, the first thing we saw was the pier. We walked to the Monte Carlo Casino, it was right on the water. We tried to get in, but it was 21+ and there was a strict dress code, and I don’t think my jeans and T-shirt would have cut it!

Then we went to a Cactus Garden. It was a whole mountain side of just cactus plants, it was like a tropical jungle with all these cacti, and some of them were in bloom, it was so pretty. From the top of the mountain we saw Napoleon Bonaparte’s Palace. We took lots of pictures! Inside of this mountain was a cave, and we walked down 300 meters into the middle of this mountain and there were stalagmites that were hundreds of years old inside. 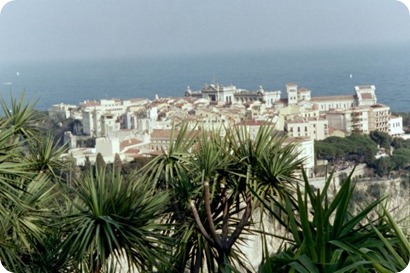 Then we got pizza and headed to the train station…..and then the fun began. So at the station we met 18 guys from the United Kingdom, some of them were Scottish, others British! They were so funny! They were all talking with their English accents and they called to Whitney and I “Ladies, come and join us, we are just talking”! Everyone was laughing and having a good time, so we did. We ended up on the train with them back to Nice. They invited us out to a bar with them and we agreed to meet them a half hour later. We waited a half hour for them and we figured they stood us up. We were beginning to feel stupid for even waiting there so long. But then, we turned and saw 18 Scottish guys, all dressed up like it was Halloween, they all had wigs on, some of them wore Scottish kilts. One guy had on oversized shorts on with a fake plastic butt sewn into them, so it looked like his butt was hanging out. As we walked down the street, he would bend over and pretend to tie his shoe and everyone was looking at him laughing, it was like Candid camera, it was great. We were laughing so hard. 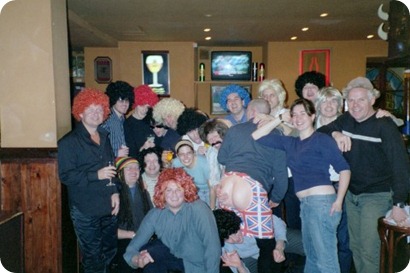 Finally we get to a nice bar on the beach and the bartenders looked at us funny when we walked in.I had a wig on as well!!! They set up a tab and we drank all night for free!!! One guy told me that when I grew up and had my own company, I would take out some students too, but now it was their job to pay for us. They spent 400 Euro in 2 hours! We even had a Champagne toast. At one point, everyone was doing shots and the guy with the fake butt yelled Bottoms UP, as we all took them. It was the funniest thing ever. I told them we were from boston and one guy said “Tell me something, where did you guys put all the tea?” We talked about the Revolutionary war and I said, “Yeah, what was with those stupid red coats?” They laughed! At some point during our walk back to our hotel, they bought us roses. haha tacky but cute.Finally, after an eventful evening, we walked back to our hotel….

The next day, I had a nice 15 hour train ride—hung over…. Oh baby.What a weekend!

Today was the last day together for irving and I… and we headed, with the group, to Versailles. The courtyard was really nice, but again, it was really cold. We said our good-byes, and he headed home…. And I walked through the palace, not really remembering much of it though.

Then, I went, by myself to see the Monmantre (Where Amelie was filmed). I also saw the real Moulin Rouge, which was right dead smack in the middle of the red light district! I took pictures and took the metro back to my hotel.

Emily, Marjorie and Tony and I headed to the train station. We are going to Barcelona. We booked couchettes and went overnight to

Last night was Karaoke Night at the Castle…I got up the guts go get up there and sing a few songs, including WANNABE by the Spice Girls! Doesn’t that remind you of Freshman Year of High School??!! It was good times. Emerson sold beer for 40 cents…that was pretty cool too! Wake up call: Feb. 14th, 7am. We all eat breakfast, and find Valentine’s Day candy in our mailboxes. (Conversation Hearts—in Dutch!)

We board the coach bus and head for Paris… we get there at 4pm. Upon arrival, all 80 of us head to the Hotel Campanile. We are forced to wait outside for like a half hour while they check in for us. I walk into the lobby of the hotel…. And Irving is there waiting for me with a rose! (Valentine’s Day weekend in Paris…this is gonna be good!)

We walked to his hotel, and I dropped off my stuff. We then walked around the city for a bit, then met up with the Emerson Group for a little tour of Paris.

It was sooo cold outside, but we had to listen to hours of lectures OUTSIDE… we went to the Church of Notre Dame, and walked to the Louvre. It was beautiful at night, all lit up! The whole city was romantic… it was like a dream. We ate dinner at an Italian Restaurant, we tried to order in French, but that didn’t work out too well.

A few pictures from our Valentine’s Day Weekend in Paris!!! 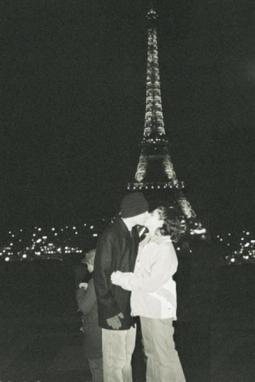 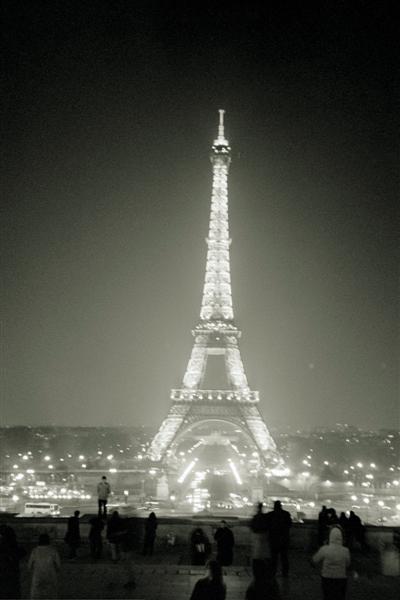 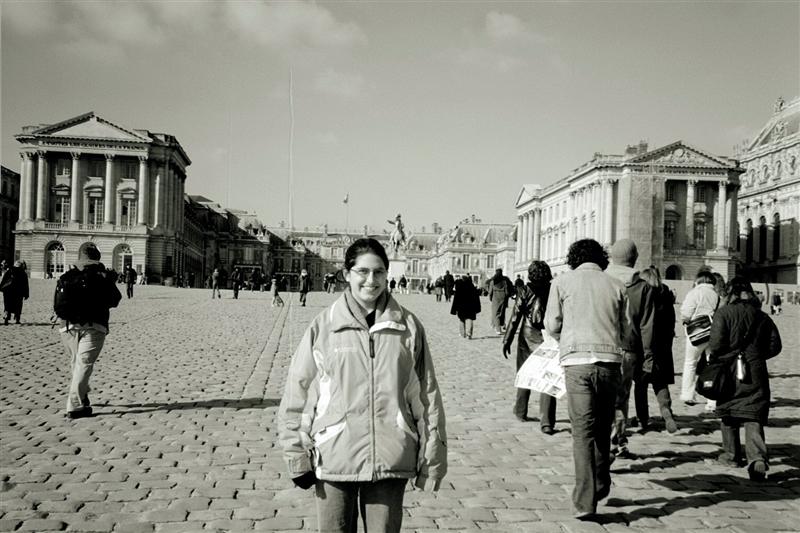 Well, tomorrow is Valentine’s Day… and I’m going to be in Paris… How Romantic!

Anyways, I wanted to update everyone on the situation in Europe. Everyone knows that tomorrow is the day the European countries decide whether or not they will support the UN on the war against Iraq. Here is the deal. The decision wont be made until tomorrow afternoon… we will already be in Paris… If France decides to support the UN, then it becomes one of Iraq’s targets, in theory. If this is the case… then our academic program in Paris is gonna have to change a bit… we will have to split up, the State Department advised Americans abroad not to travel in big groups. Then, on a minute’s notice, we were told we will have to spread out around the city, and not go into any American places, such as McDonalds, Hard Rock Café, etc. We are not to wear anything with the American flag on it, or anything that screams American… we have to keep a low profile, and not draw attention to ourselves. I think this is worst case scenario, and we really shouldn’t be too concerned… its just precaution. Right now, we are pretty safe still… The eastern countries are more at risk than I am here. One thing they did point out was that England was probably not a good choice. Since it is in such support of the US, it becomes a bigger target than France.

This is like a first hand learning experience about politics… I have no clue. We were told to watch the news and check email twice a day when we are traveling.

BUT…on a good note, I’m doing well, the weather has been very warm… high 40s maybe. I am going to Spain after Paris, and its high 50s there. That should be very nice.

My classes are getting harder… midterms are coming up fast… I have so much work to do… that I should be doing right now, but that’s ok. I am knitting another scarf, this one is royal purple, and its fuzzy and sooo warm… You are all gonna be so proud of me! Irving sent me a wonderful big fluffy pillow, so now I am sleeping better…. no more stiff necks, so that’s a plus. I sleep so well now… mmmm

Well, that’s it… I wont be here to update the journal again until Feb.23 rd. I have other things to do, like go to Paris. hee hee….